So now Carlo Ancelotti can fulfil his ambition to manage Roma, the club he captained for eight happy years and to which he has always said he 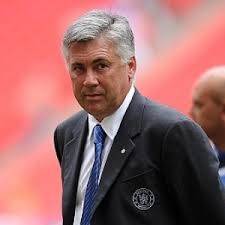 would return one day. The end of his time at Chelsea surely arrived here, in the form of a defeat far more conclusive than the single-goal margin might suggest. For the genial Italian a midweek trip to the Eternal City is likely to bear fruit in the form of a contract with Roma’s new American owners.

“Italy is my country and I can’t say I will never go back there,” he replied, reasonably enough, when asked about his future. “I love my country. But in the last two years I found a fantastic atmosphere here, with no violence in the stadiums, and I would like to stay here for this reason.

“I have another year on my contract and I would like to stay but that is a decision of the club. We will arrange a meeting after the end of the season. I am honest and I have to say that we didn’t do the best. Last year was a fantastic season and this one has been a little bit different. But I think they have to consider all the season. I want to thank the players because for the last two months they were the best team in the Premier League.”

Not here, however. Not by a distance. Roman Abramovich was not present to see his team forced into the recognition that their season would end without any sort of reward and, after making donations in the region of £700m to the club, he would hardly have relished the unmistakable reality of Manchester United’s dominance. Ancelotti’s half-time substitutions showed that he recognised where the early shortcomings were to be found but the solutions were not potent enough to undo the damage.

David Luiz, so extensively praised following his arrival in January, and particularly after the buccaneering goal with which he set Chelsea on the road to victory over United at Stamford Bridge in March, produced the sort of error in the very first minute of the match to which his instant commitment may always render him liable. As he stretched to reach Park Ji-Sung’s through-ball, he succeeded only in getting a touch which improved the angle for Javier Hernández’s scoring shot.

The £21m Brazilian disappeared at half-time, along with the £16m Mikel John Obi, who had been on the brink of joining United from Lyn Oslo as a 17-year-old in 2005 when Chelsea snatched him away. Under the terms of a complicated and fraught negotiation, Chelsea had to pay £12mof his fee to a gazumped United, who will have felt a great deal less chagrined after Mikel’s undistinguished performance here, one of many which have undermined the claims made on his behalf during his teenage years.

Alex and Ramires, who replaced the two underperformers, made a much more effective contribution. Ramires produced the cross which Branislav Ivanovic headed down for Frank Lampard to volley home with just over 20 minutes to go and two minutes later Alex raced across and slid in to block the point-blank shot which Wayne Rooney aimed at an empty net, after Hernández had raced through on the left and cut the ball back to his strike partner.

To Ancelotti’s credit, and theirs, his players fought hard to the end, the final image being that of Didier Drogba battling to win the last piece of possession on the edge of the United area a few seconds before Howard Webb blew the final whistle. Then came the sight of Drogba, John Terry, Lampard, Ashley Cole and Michael Essien wholeheartedly embracing their conquerors as Old Trafford exulted in the knowledge that only one point is now required from the final two games for their club’s 19th championship.

Where do Chelsea go now? Almost certainly back into the realms of speculation on the identity of a newcomer who will be the seventh manager of Abramovich’s ownership, including one caretaker. Guus Hiddink still has the ear of the Russian billionaire and, having indicated his own disinclination to return to the manager’s role, is apparently recommending Marco van Basten, who coached Holland at the 2006 World Cup and the 2008 European Championship – where his team were knocked out by Hiddink’s Russia – and resigned from Ajax two years ago after failing to qualify for the Champions League. André Villas Boas looks a better prospect. Having wrapped up the Portuguese title in his first season with Porto, he last week oversaw their progress to the Europa League final.

But few will take any pleasure from the departure of Ancelotti, a civilised man lacking only the spark of inspiration.