Sir Alex Ferguson says he expects Edwin van der Sar to retire at the end of this season but believes lessons learned from Peter Schmeichel’s departure will prevent another goalkeeping crisis at Manchester United. 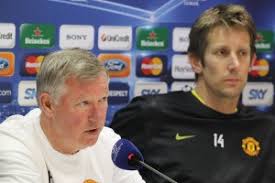 Van der Sar was 40 in October and, despite recent mixed messages over his intentions when his contract expires next summer, has told Ferguson this will be his final campaign at Old Trafford. “We are planning for this being his last season,” the United manager said today. “I expected it. It is amazing to be playing at this level at 40 years of age. You can only do it if you’ve got that structure and the mind.

“To be able to programme himself and train the way he does is phenomenal. He’s an outstanding man.”

United have not discussed a possible coaching role with Van der Sar, although Ferguson indicated a position could be made available for the former Ajax, Juventus and Fulham goalkeeper. “He is a player that will be of interest because of his knowledge and standing in the game,” said the Scot, who rates the Dutchman alongside Schmeichel as his most important keepers at Old Trafford and now faces a similar predicament over finding a permanent successor.

A procession of players failed to live up to the Dane’s imposing reputation after his United exit in 1999, ranging from a World Cup winner in Fabien Barthez to calamities such as Massimo Taibi. Tomasz Kuszczak, who may also leave the club next summer, and Ben Foster failed to dislodge Van der Sar as No1. Although Anders Lindegaard has recently signed for £3.5m from the Norwegian club Aalesunds and there are high hopes for Ben Amos, Ferguson indicated a proven, top-class keeper will be on his transfer agenda next summer. David de Gea of Atlético Madrid and Schalke’s Manuel Neuer are potential candidates.

“I think we have learned the lesson [from failing to replace Schmeichel],” Ferguson said. “I should have signed Van der Sar after Schmeichel. I made a mistake but now we think we know where we’re going. Both of them have been magnificent. I’ve been very lucky to have had them both.”

Ferguson gave no credence to rumours that David Beckham could return on loan during the MLS close season. “I don’t think so with David at his age,” he said. A more immediate aim for the United manager “is to be top of the league by 4 January. If we are, then we have done well.”

The league leaders entertain Sunderland on Boxing Day, with games at Birmingham and West Bromwich Albion and at home to Stoke completing their festive campaign. Despite Tottenham’s continued improvement, Ferguson believes United’s closest challengers will come only from the usual suspects.

“There were indications last season when Tottenham got into the top four that things were changing and that elite four that people had spoken about for years had changed,” he said. “And it looks as if it can change again because there’s a battle for fourth place again. You have to recognise it’s a different type of league but I don’t think there’ll be anyone outside of ourselves, Chelsea or Arsenal [challenging for the title]. I think those three will certainly be there.

“I know Harry [Redknapp] is talking up his chances very well at Tottenham but they’re involved in the Champions League and it’s a new thing for them. Particularly if they get through this next stage, it’s not easy to manage European competition at that level and do the league programme and FA Cup ties. It’s very difficult and usually your experience gets you through. [Manchester] City have got a chance, of course. That’s the other team. And they’ve also got the Europa League but maybe they can buy in January. Harry could maybe buy as well because it’s very difficult to manage them both.”

Ferguson has no concerns over a rearranged date for United’s visit to Chelsea, provided it is fair to both clubs’ demanding schedules. The original game was postponed due to the snow last weekend and may not take place until the end of the season.

“I’m not concerned when it’s played,” said Ferguson. “So long as it’s fair on both teams in the sense of congestion of fixtures when the game is actually played and wedging it between certain games. We’ve had to look at the fixtures in the last few days and it’s quite a difficult one. It certainly seems like it’s not going to be played until after March at least.”