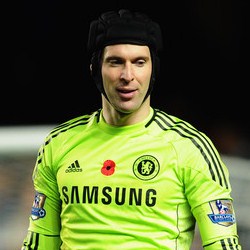 United raced to a 3-0 lead by halftime thanks to goals from Chris Smalling, Nani and Wayne Rooney, before Fernando Torres pulled one back for Chelsea immediately after the restart.

But despite dominating proceedings for much of the second half, the Blues were unable to put away their chances, handing United a victory which now sees them take the outright lead at the top of the Barclays Premier League.

Despite lamenting Chelsea’s inability to put away their chances, Cech believes his team-mates deserve credit for a stirring second-half fightback.

“You can never say it is fair or not, but they scored three goals and we scored one,” Cech told Chelsea’s official website. “The reflection of the day is there.

“They were efficient in terms of scoring goals and that’s why they won, [but] we can be pleased with our reaction in the second half.

“3-0 down is never easy, but we came back, scored a goal and created chances and 3-2 would have been an exciting end of the game, but it tells a story that we didn’t take our chances.”

“We don’t care what people are into. We do our job, try to do our best and we will continue doing that.

“Even though we lost today [Sunday], there is a long way to go.

“City dropped some points [at Fulham] and you can see the league will be difficult for everybody.

“We are positive that although we lost, we can build on it.”

Chelsea’s next match will see them take on local rivals Fulham in the Carling Cup, before they resume their league action on Saturday against newly-promoted Swansea.