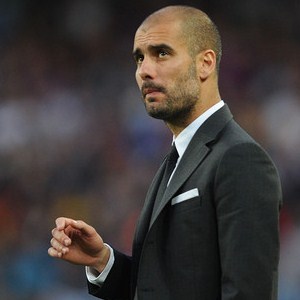 guide them to last night’s 5-0 win over BATE Borisov in the UEFA Champions League.

Lionel Messi moved into joint-second place on Barcelona’s all-time goalscoring list as his double helped the defending champions to a comprehensive Group H win in Minsk.

Guardiola’s side were 3-0 up at half-time thanks to an own goal from Aliaksandr Volodko and further strikes from Pedro Rodriguez and Messi.

The Argentina international grabbed the fourth goal early in the second half with an assured left-footed finish to move level with Ladislau Kubala’s total of 194, before David Villa rounded things off as the visitors made light of the sodden conditions.

The win was also Barcelona’s second 5-0 victory in a row, following their weekend success over Atletico Madrid to see them move to second in La Liga.

Guardiola hopes his side can always maintain their combative approach and said: “[I hope] they don’t lose the competitive spirit they have shown this Wednesday, and that has characterised this team for so long… this spirit I’ve been seeing for years.

“It’s imbedded. I’m very clear that they feel it. It doesn’t matter if we win or lose, but we always have to keep doing the same things.”

“[I hope] they don’t lose the competitive spirit they have shown this Wednesday, and that has characterised this team for so long.” Pep Guardiola, Barcelona coach

Despite the scoreline, Barça had to work hard to break down an obdurate defence, with the partisan home crowd on their feet whenever their side entered the Barcelona half.

Guardiola gave his players credit for retaining their composure, saying: “The truth is that they defended really deeply, and I didn’t expect that. Sometimes if you don’t score early on it makes you lose a little patience. But we were able to cope really well, and this gave us the time and space to develop our game.

“It’s never easy attacking against ten defenders. All these teams are pretty similar. They set out to defend and hope you lose a little patience. It was very important to control the midfield players, and [Mateja] Kezman, and our players have done that very well.”

Of Messi, Guardiola expects the Argentinian to break Cesar Rodriguez’s 235-goal record as long as he stays at the Camp Nou. “He’s equalled another Barça legend, who, by the way he played and was, changed this club. With Kubala’s football, the Les Corts stadium became too small.

“The only way Messi won’t catch Cesar is if he leaves here, but we hope he continues for many years. If at 24 years old he’s done what he’s done, I can only congratulate him.”

Messi added: “It was a difficult game, with how they played at the back. It wasn’t easy to find free space when they closed everything down with many men close to their area.

“But then the first goal came, luckily, and it changed everything. We’re happy with the victory, which was our objective, like in the first game. We have to grow. We need patience to find our rhythm, but we’re happy to have won.”