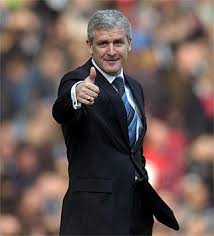 him as Manchester City manager last season, claiming he would have taken the club further by this point than the former Internazionale coach has done.

Despite spending around £135m on players, Mancini’s record this season is worse than Hughes’ at Eastlands last term, with the same points accrued after 13 games but with an inferior goal difference. Hughes implied that City should not have sacked him as he prepared his Fulham side to face them at Craven Cottage .

“They made the change with the view that they wanted to accelerate the process of getting success,” he said. “That doesn’t seem to have happened. I know what I left behind, that the club and the group of players I had there was good enough to hit the targets I was given. I knew they had to spend significantly more money [last] summer – that opportunity was going to be given to myself. It wasn’t. If I had still been there I would have been there two and a half years so that I think would have helped.”

Mancini strongly defended his record, claiming City are far stronger under his management. “We have improved a lot,” he said. “We have won a lot of away games. We are in fourth position, two points behind [Manchester] United. We must check again at the end of the season but I think we will get into the Champions League and probably win something.”

His problems have increased, though, amid revelations of a row with four players – Emmanuel Adebayor, Shaun Wright-Phillips, Joleon Lescott and Wayne Bridge – over what they perceive as special treatment for Mario Balotelli. They took issue with Mancini after Balotelli left training early the day after the Manchester derby despite not having played in that match.

Mancini admitted after his appointment last December that he had been speaking to City before Hughes’s sacking, yet he denied he should have regrets or feel guilt over how the Welshman was dealt with. “No. This is life. This is the manager’s life,” he said. “Today you can stay here, tomorrow you can be at another club. When one manager doesn’t work there is another manager. The world is full of football managers. It’s not my problem. If the manager doesn’t accept this, he doesn’t do this job.”

Hughes disagreed. “It is not something that sits comfortably with me or something I’ve ever done,” he said. “I have respect for people’s position. If clubs come to you and ask ‘are you interested?’ I would say I wasn’t aware there was a vacancy but, when the wheels are set in motion, these things happen. I’m not naive enough to think it doesn’t happen. I’m big enough to understand.”

Garry Cook, City’s chief executive, has admitted he began the search for Hughes’ replacement the previous summer, despite publicly stating on various occasions that Hughes had the full backing of the Abu Dhabi owners. “It was disrespectful towards me, the way I was treated in the end,” Hughes said. “In fairness I had all the support on occasions when I needed it. There were occasions when there was not a lot of support. Towards the end, when I needed support, it was absent. So read into that what you want.”

Hughes further raised the temperature before Sunday’s game by accusing the City hierarchy of not understanding the unique nature of football. “You need more time,” he said. “Football is different from business. Sometimes when business people come into football then there’s a lot of strategy, business-speak, that flies around because that’s their world. They think they can apply those business principles to football.