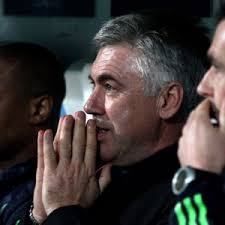 nightmarish mid-season slump deepened with a 3-1 defeat at Arsenal, and the Italian conceded he must be the first to “wake up” if their title challenge is to be revived.

Roman Abramovich, Chelsea’s owner, was absent here as Arsenal stretched their rivals’ miserable sequence to one win in eight matches but an immediate improvement is required if the focus is to be drawn from Ancelotti’s position.

The Italian accepted responsibility for this latest defeat – inflicted by goals from Alex Song, Cesc Fábregas and Theo Walcott with Branislav Ivanovic replying for Chelsea – but was particularly shaken by his side’s sloppiness having seen improvement in the draw at Spurs, their last game, a fortnight ago. “I didn’t expect this,” he said. “I was surprised by this performance. I’d seen some very good training sessions this week, so I did not expect this. We have to wake up. Until now we’ve been sleeping. But maybe I have to be the first to wake up.

“I’m worried, obviously, because that’s six [league] games we’ve not been able to win. I didn’t see the team playing the way we want and we had difficulty playing our football. It’s obvious we don’t have the confidence to play our style at the moment. But when you are sleeping, it’s important you wake up quickly. It’s difficult to answer whether Chelsea can still win the title. We’ve lost a lot of points and our position, but I have confidence.”

Abramovich chose to terminate Luiz Felipe Scolari’s tenure at Stamford Bridge when it appeared Chelsea might surrender their position in the top four – they were fourth and seven points from the summit at the time – and, with it, entry into the lucrative Champions League. Yet this was already the Londoners’ worst league run since 1999. Although Ancelotti believes he still benefits from the oligarch’s backing, the prospect of slipping to sixth should Bolton beat them tomorrow puts the manager’s predicament in grim context.

Asked how long he thought the club’s owner would remain both patient and supportive, Ancelotti said: “I don’t know. Obviously he won’t be happy at this moment. I will take my responsibility, but this is a question you have to ask him, not me. We have to do better. It’s not usual that Chelsea cannot win for six or seven games. But everyone said I did a fantastic job last year, and now people are saying other things. The table is not good, but this is the reality. We have to do better. I’m not worried. I have to work.”

Chelsea had won their past five meetings in all competitions against Arsenal, yet this was transformed into an occasion when Arsène Wenger’s side confirmed their potential to claim a first league title since 2004. This was their first victory in 12 meetings against Chelsea and United, and a timely reminder of their continued development. Fábregas insisted “belief” had been the difference in this display, and Walcott suggested the hosts had made Chelsea “look average” at times.

“Mathematically it was important because it keeps us in touch with the leaders but, psychologically, that was also important,” said Wenger. “Our capability of winning big games has been questioned, so that can be a pivotal moment. Beating the big teams at home will have an important impact on this league.

“Two years ago with the same players, we were maybe battered by Chelsea. Last year we felt we were getting closer. This year, at United and Chelsea, we were more frustrated because we were more in the game. Maybe we played a bit with the handbrake [on]. It’s been a slow learning process but we got it out of our system tonight. Fábregas had said we were maybe ‘scared’ to win. That was a strong word to use, but maybe there was something in it. We didn’t see that tonight.

“We were good in the challenges tonight. We’ve improved on that front. We have more ‘mannish’ dimension in our team in all the duels, and we’re not bullied any more. We’ve matured over the last two years. I still count Chelsea as one of the big contenders of the championship. I do not think they’re out of it – not at all – after their defeat tonight. But I don’t think we’re far from winning the title. We’re in December and in touch with United. I hope this victory will convince the team that we are moving in the right direction.”