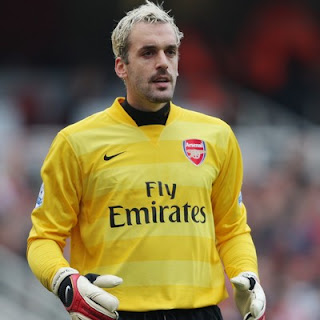 and win the Premier League title.

A howler from the Gunners’ goalkeeper at West Brom last weekend ultimately cost his side two precious points in their quest to haul in Manchester United at the top of the table.

But Almunia insists Arsenal are in safe hands, despite injuries to first-choice keepers Wojciech Szczesny and Lukasz Fabianski, and says now is his time to shine after spending much of the season watching from the sideline.

‘I have had some very bad moments this season but now I am content because I am playing again,’ he said. ‘I am a professional and I would never leave a club or a project unless it was the decision of the manager. I will always defend my club. I am an Arsenal player and that’s where I want to succeed.

‘The injuries to Fabianski and Szczesny have given me a chance in the position again. I am sorry for my team-mates and I’m hoping they make a quick recovery, but now is my moment at Arsenal. It’s an important time but I will try to enjoy it and do my best for the team.’

The pair clashed during the German’s previous spell at the club when fighting for the No 1 jersey, but Almunia revealed that they have since held clear the air talks.

Lehmann is not yet match-fit, having come out of retirement to return to the Emirates, meaning Almunia is likely to keep his place in the team despite the gaffe at the Hawthorns.

But the Spaniard showed the pair’s new-found respect by calling his 41-year-old counterpart a ‘world-class’ keeper.

‘I don’t have problems with Lehmann. It’s certain that we’ve had differences in the past but after he left Arsenal we spoke and everything is clear now,’ said Almunia. ‘I have a good relationship with him and there is respect between us. I don’t believe it should generate controversy for the rest of the team.

‘Lehmann has arrived to help us and that is positive for our work this season. For me, Jens Lehmann was one of the best keepers in the world and his experience could be helpful.

‘To fail in the Carling Cup, FA Cup and Champions League was a hard blow for us, but the title is possible and this is our challenge. It’s been difficult with injuries and confidence. We need Cesc Fabregas because he’s such an important player for us and I’m hoping he’ll be back from injury as quickly as possible.’