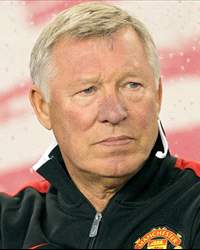 Community Shield at Wembley next month after admitting that the player he really wants is “not available”.

The United manager has signed three players this summer but an extensive search for a playmaker to replace Paul Scholes has so far proved to be a failure.

It is anticipated that if Luka Modric and Samir Nasri leave Tottenham Hotspur and Arsenal respectively, they will head to clubs other than United and a deal to bring the Dutch midfielder Wesley Sneijder to Old Trafford from Internazionale has floundered due to the extreme costs involved.

Ferguson is therefore preparing with the squad he has now for a Community Shield match with a difference as it pitches United against their Manchester rivals, City, who won the FA Cup last season to end a 35-year trophy drought.

“It is not a normal Community Shield for Manchester United,” said Ferguson. “It is addressing our noisy neighbours again. It will be an interesting match.”

It is a phrase Ferguson first used following United’s dramatic derby triumph over City at Old Trafford in September 2009, when Michael Owen scored the winner in a 4-3 victory. City have since made even further inroads on United’s territory, with Ferguson admitting the prospect of further signings is slim. “We lost five players in their 30s this summer. That helped finance the three younger players – Ashley Young, Phil Jones and David de Gea – I have brought to the club.

“At this moment, I can’t see another addition. The type of player we might have been looking for is not available. I am happy with the players I have got at this moment in time.”

Ferguson also revealed that Javier Hernández, who has finally made his eagerly awaited appearance on tour following a triumphant Gold Cup campaign with Mexico, is unlikely to be involved in the match with the MLS All?Stars at Red Bull Arena on Wednesday. Hernández only began training on Monday and the United manager does not want to push him too hard.

“He has had a month’s holiday, which he needed after the Gold Cup,” said Ferguson. “It was a long season and he played in the World Cup as well, so he has not had a lot of rest in the last year. The most important thing for us is to give him some proper training before we even consider him for the first team.”

Hernández’s arrival has been welcomed by fans, who on United’s three stops so far have been disappointed by the Mexican’s absence. It is a reflection of the impact he has made since joining the club 12 months ago, although he insists his life has not changed despite the obvious adulation.

“I feel the same,” he said. “I am playing for the best team in the world. The only thing that has changed in the last 12 months is that I have played a lot of games. All I have done is try to improve. That is the only thing on my mind.

“This whole move has been a dream come true for me. The key has probably been my boss and my team-mates. It means a lot to me to be part of Manchester United. All the extra things are just that, extra things. To be part of this team is wonderful.”