Barcelona will seek an immediate return to winning ways in La Liga after suffering just their third defeat of the season against Arsenal. 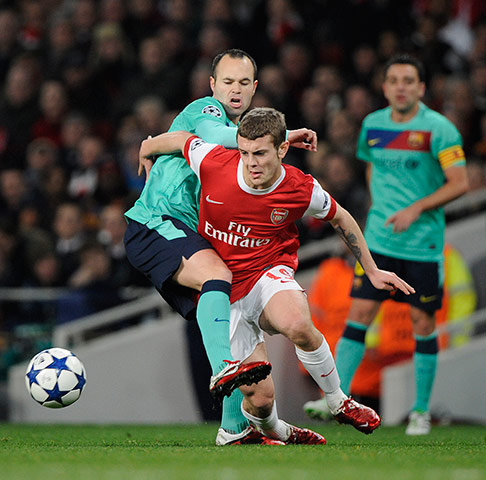 The Spanish champions went down 2-1 at the Emirates Stadium on Wednesday in the first leg of their Champions League round-of-16 tie.

The league leaders also dropped two points last week in a 1-1 draw away to Sporting Gijon, allowing Real Madrid to close the gap to five points at the top of La Liga.

By Barca’s own remarkably high standards, one draw and one defeat is more than a minor stumble and if they falter again at home to Athletic Bilbao on Sunday, Real could be back to within two points.

Barca are undefeated at home since September last year, but Bilbao have more reason for confidence than most teams ahead of their visit to the Camp Nou.

The Basque outfit went unbeaten over two legs of a Copa del Rey meeting with Barca earlier in the season, drawing 0-0 away and 1-1 at home to lose out on the away goals rule.

Joaquin Caparros’ side lost 1-0 away to Mallorca in their last league match, but had previously won three consecutive games and sit fifth in the table.

Real, meanwhile, have the opportunity to put Barca under pressure when they play a day earlier at home to Levante.

Jose Mourinho’s side battled to a 1-0 win over Espanyol in their last outing, despite being reduced to 10 men in the first two minutes at the Estadi Cornella-El Prat.

Also on Saturday, third-placed Valencia host Sporting Gijon at the Mestalla and struggling Real Zaragoza are at home to mid-table Atletico Madrid.

In Sunday’s other matches, bottom side Malaga have a daunting trip to fourth-placed Villarreal, while fellow strugglers Almeria – second-last in 19th place – are at home to Deportivo La Coruna.

Osasuna must beat sixth-placed Espanyol away from home if they are to climb out of the relegation zone.

Getafe will expect to pick up maximum points from their home match against Racing Santander and Sevilla are also favourites to come out on top when promoted Hercules visit the Estadio Ramon Sanchez Pizjuan.

In Monday’s match, ninth-placed Real Sociedad play host to Mallorca, who are 10th.