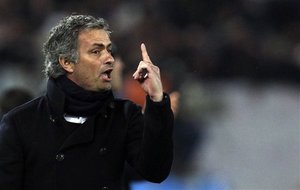 Reports have suggested that the Portuguese tactician could be lured to France by PSG’s wealthy owners.

However, Zidane insists Real expect Mourinho to remain at the Bernabeu for ‘many years’ to come as they look to overhaul bitter rival Barcelona’s current domination of European football.

“Mourinho to PSG is just a rumour,” Zidane told Canal+ earlier this week.

“He is very happy where he is.

“It is like the reports saying David Beckham is to join PSG. These are only rumours.

“Mourinho will, I think, be staying at Real for many years. I hope he does.”

Should Mourinho decide to swap La Liga for Ligue 1 with PSG he will see some familiar faces at the club. Claude Makelele, who played for Mourinho during his spell at Chelsea, has joined the club as an advisor.

Makelele’s role will be to help with the development of the club’s sports policy. He had spent the last three seasons with PSG before retiring.

PSG also have Leonardo on their books as sporting director.

The French side have made huge waves in the summer transfer window, backed by the deep pockets of their newfound Qatari owners. Among the big-name signings the club’s new owners sanctioned included shelling out a record €42million to sign Javier Pastore from Palermo.