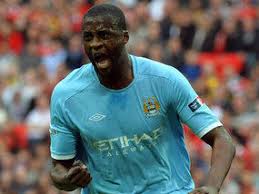 And Toure believes there is no better time to announce their intent than at this Sunday’s Community Shield match against reigning Premier League champions and arch-rivals Manchester United.

City have long had to suffer in silence at being Manchester’s second team, after watching their neighbours claim success after success, while going trophyless themselves for 35 years.

However, that all ended last season when the Citizens claimed the FA Cup, a triumph which was made sweeter after they eliminated United in the semi-finals.

Toure scored the winner in that game, and followed up by scoring the only goal in the 1-0 final victory over Stoke, and with City now looming as a genuine title threat, Toure has earmarked the Community Shield tie as the perfect opportunity to further assert their intentions for the coming season.

“If it is possible, it would be fantastic to score [for] a third [time] at Wembley,” Toure said, according to The Sun. “I like it there.

“But the most important thing is not that I score another goal there. It is that the whole team prove to our fans and everyone else that City are coming.

“We have to show United we are here.”

While the last seven Premier League titles have been shared between United and Chelsea, there is growing consensus that this season could be one of the most keenly-contested campaigns in awhile.

Despite their lack of trophies, Arsenal always remain a threat, while Liverpool’s resurgence under Kenny Dalglish means that up to five teams are expected to challenge for the title this term.

Toure concedes winning the league will not be easy, but is confident the 2011/12 season is City’s time so shine.

“The league this year will be very hard and we will have to improve a lot, but I think this will be the year for us.

“We are going to have to fight to show people that City are going all the way to the top. We have to make a statement from the start.

“I think other clubs are now starting to take note of the new Manchester City.”

City’s arrival as one of English football’s top teams has been regularly aided by the influx of cash from the club’s wealthy Arab owners, and this summer has been no different with the club sealing the signature of Argentinean star Sergio Aguero from Atletico Madrid for a reported fee of £38million.

Toure, who himself was a big-money arrival from Barcelona last summer, believes such signings essential for the club to progress.

“The club are signing players and we are getting some good, important players returning to their best.

“Edin Dzeko is in good form and we have signed Aguero, so we’re getting better and better.

“Aguero is a fantastic player. He is so smart, so clever. He is very, very fast.

“But you look through the squad and there is real quality in all positions – not just the starting eleven but on the bench too.”

Following this Sunday’s Community Shield clash against United, City will open their Premier League campaign at home to newly-promoted Swansea on August 15, and it would not be too much of a surprise to see the Citizens sit on top of the league standings after the opening round of fixtures.