Former Liverpool and Tottenham midfielder Jamie Redknapp launched a scathing attack on Fernando Torres after another inept performance on Sunday against Birmingham City.

“Terrible,” “diabolical,” “sloppy” and “lethargic” were some of the words used by the Sky pundit, but a critique that must have had many football fans nodding in agreement with was that the Spaniard looked “fed up.”

He struck a forlorn figure lying on the ground in agony at the end of Spain’s triumphant World Cup final, and the pain of his adductor injury was likely exacerbated by the realization that had been so sorely below the level of his teammates in South Africa. 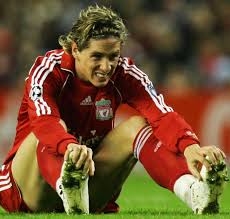 And although Torres hit the winner against West Bromwich Albion last week, he is still looking desperately out of sorts.

There is no doubting that Torres is an exceptional talent. His record of 57 goals in 82 games for Liverpool, 26 goals in 81 games for Spain and 82 in 214 for Atletico Madrid speaks for itself.

And it his natural goal-scoring ability that attracted the attentions of the likes of Barcelona and Chelsea in a summer rife with transfer speculation about his future.

When Torres opted to stay at Liverpool, the relief of Reds players, coaches and fans alike was palpable.

Upon reflection, though, Torres may not have made the wisest decision for himself, and Liverpool could soon well realize that, particularly in their current financial predicament, they would have been better off cashing in on the marksman for a handsome sum.

But can a player go from being magnificent to mediocre in such a short time?

Well actually, he can.

The life of a footballer is short. And while natural ability doesn’t disappear, many a player has found out that when rust sets in to his game, the road to decline can be remarkably steep.

They say a change is as good as a rest, and that is particularly pertinent for footballers.

Tottenham striker Jermain Defoe is a good example of how a change at the right time can help restore a footballer’s confidence and set his career back on track.

In the 2007/2008 season, Defoe was extremely frustrated at being behind Robbie Keane and Dimitar Berbatov in the Spurs pecking order. And while many Tottenham fans were livid when he was sold to Portsmouth in the January transfer window,  (and even more livid when he scored against Spurs at Fratton Park) he reaped the benefits of a move away, and he has returned to Tottenham a far more accomplished player (although it still sometimes appears like he was born offside.)

Another Tottenham player also provides the opposite example – of what not to do when your career starts to wobble.

Darren Anderton was an phenomenal right winger, and after joining Spurs from Portsmouth in 1992, he soon became a vital player for the north Londoners and cemented his place in the England team.

Granted, persistent injuries were a huge factor in his slide, which began in 1995, but staying at Spurs for 12 years certainly didn’t help him, despite managing to win a surprising amount of England caps (30).

Anderton needed to turn his back on White Hart Lane. He was linked with both Liverpool and Manchester United , and a move could have done wonders for his career.

Arsenal manager Arsene Wenger recently offloaded one of the biggest talents he has bought in his time at the club.

And while the sale of Eduardo was sad for many Gunners fans, the managerial maestro surely realized that whether he liked it or not, the Croatian’s horrific injury had for all intents and purposes ended his Arsenal career, due to timing rather than any frailties in his game, and he needed to move for the sake of  his football.

And two goals in five games for Shakhtar Donetsk seems to be vindicating Eduardo ‘s and Wenger’s decision.

Manchester United manager Sir Alex Ferguson came to similar conclusions regarding Diego Forlan and Gerard Pique . Although the pair didn’t suffer any serious injuries, Ferguson realized that while both players were excellent prospects, they would quite probably thrive at a different destination in ways they wouldn’t do at Old Trafford – just how much they would thrive was surely even beyond Ferguson’s wildest dreams.

It might be more psychological than anything else, but a simple change can rejuvenate a player’s career, particularly those injury-prone talents.

Different surroundings could do a world of good for Torres, and help him rediscover some of that class with which he was he was turning everything he touched into gold not so long ago.

And El Nino should think long and hard about whether he wants to do a Defoe or Eduardo , or be another Darren ‘Shaggy-turned-Shoddy’ Anderton.

January isn’t too far away.