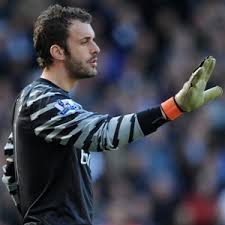 Allardyce, the manager, moved quickly for the 34-year-old after learning that Robert Green faces around six weeks out with a knee cartilage injury.

“We’ve been hot on the phone and secured an excellent signing in the short-term in Manuel Almunia from Arsenal,” said Allardyce. “It’s a big thank you again to Arsène Wenger and Arsenal for allowing us to get such a high-class and experienced goalkeeper to come in and fill-in for Robert [Green] for the time being.

“I think he hasn’t had as many games at Arsenal as he would have liked so he wants to play first-team football.

“We hope that huge amount of experience he has had at Arsenal and the football he has played on a regular basis will stand us in good stead here at West Ham and more and more clean sheets will come from his presence in goal. That will obviously help us to secure more victories while Robert is out.”

Almunia, who becomes the second player to join West Ham on loan from Arsenal this season after the England Under-21 midfielder Henri Lansbury, has fallen behind both Wojciech Szczesny and Lukasz Fabianski in the pecking order after making 175 appearances for the club.

If selected he will make his first West Ham appearance at Crystal Palace on Saturday.