Arsenal insist they can still compete with the big spenders after posting record pre-tax profits of £56million.

The figures for the year to May 31 show pre-tax group profits rose by £10.5m compared to the previous year.

Arsenal chief executive Ivan Gazidis said: ‘The group has made good progress in the last year and I am excited by the opportunities we have in front of us.’ 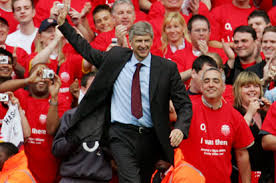 from £313.3million in 2009, boosted by the income generated from property sales.

The debt related to the Highbury Square development – which once totalled £130million – has now been repaid in full with Arsenal now enjoying the benefits of income from apartment sales.

Profits are slightly down on the football side of the business due to Arsenal having five fewer home games last season and increased wage costs.

Gazidis said the wage increases had allowed Arsenal to remain competitive on the field.

He said: ‘We continue to see upward pressure on player wages. A part of that is because we’ve invested fairly aggressively in our young player pool, and we have secured their long-term future with the club.

‘This has been a very successful period of investment but it costs money. A part of it is also driven by the external environment in which we operate where player costs continue to go up.’

Arsenal will continue to pursue their policy of developing players rather than buying big stars, Gazidis said.

He added: ‘Most of [the profit] goes back into the playing side, whether into player contracts or transfer fees. Now that doesn’t mean we can compete at the level of the Manchester Citys of this world in the transfer market, because those types of fees and those types of salaries are not sustainable for any football business.

‘But it still means, I believe, that we can compete with them on the pitch.

‘We do have a policy of building and not buying, and that’s a difficult path to tread sometimes, but as a result of that policy we’re seeing a tremendous number of good young players progressing and developing into the finished article and I think our performance against Spurs on Tuesday night illustrated this.’

A year ago, Arsenal announced pre-tax profits had risen 24 per cent to £45.5m and this year’s revenue increase has been helped by a £4million rise in Premier League television income to £51.7million and a similar increase in Champions League income to £27.3m.

It is the paying off of the Highbury Square loans that has delighted the Arsenal hierarchy most however. They were initially forced to extend the bank repayment deadline of April this year to December after the property slump first hit.

Since then the development has prospered and the debt has now been repaid in full.