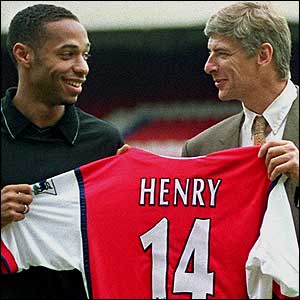 at the training ground can lift the club.

Henry, 33, has returned to his former club to keep up his fitness ahead of a second MLS season with the New York Red Bulls.

While Henry – a former Arsenal captain and the club’s all-time top goalscorer – cannot play for the English Premier League outfit, Wenger believes his arrival will help other members of the squad.

“We are happy to speak with him every day. He is in the dressing room with the players and they are happy to have him back,” Wenger told Sky Sports.

“He sees as well how much they have evolved since he left the club. He can help them to have confidence. He is a very intelligent boy who has massive experience.”

“He can help the players in the dressing room and that is what he does. But we are happy to help him to get fit and he is happy to be here.”

Wenger paid tribute to Henry’s time at Arsenal and said, like any other former player, the former France international is welcome to return to the club to gain fitness at any time.

“He was one of the greatest players this club has ever had and has done a huge service to this club,” he said.

“The only way we can pay him back is always to be welcoming, as we are with all our former players when they want to get fit.”