The Liverpool full-back Fábio Aurélio believes the absence of Steven 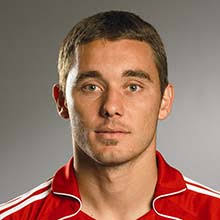 Gerrard and Jamie Carragher from the team could lead to the other players taking more responsibility.

Gerrard is still at least a week away from recovering from a hamstring injury sustained while playing for England last month while Carragher will be missing for three months having undergone an operation on the left shoulder he dislocated at Tottenham Hotspur a week ago.

“Hopefully we won’t miss them on the pitch and we can show what we can do,” said Aurelio, ahead of Liverpool’s league encounter with Aston Villa at Anfield this evening. “I think always when you wear a Liverpool shirt you have a responsibility. We just have to concentrate and do our best. It is not just me because I am one of the more experienced players, everyone has this same approach.”

Aurelio, who has had plenty of time to watch the first team having been frustrated by injuries again this season, believes things are getting better under the manager, Roy Hodgson.

“If you look at the games, we have improved a lot since the beginning of the season and the team is playing more football and had a great game against Tottenham,” said the Brazilian. “People know each other more and know more what Roy wants us to do on the pitch so we have time to continue this progression.

“We know we are not at our top level yet but we are going in the right direction.”