Wayne Rooney warned he was hungry for more after ending his year-long England goal drought. 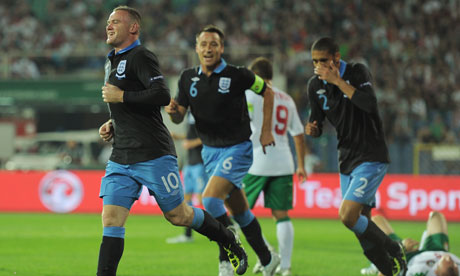 The Manchester United star has begun the season in flying form and followed up his hat-trick against Arsenal with a double for his country in the 3-0 win over Bulgaria in a Euro 2012 qualifier.

Rooney had not enjoyed the happiest of 12 months with his criticism of England fans after the World Cup clash with Algeria and then his public spat with United before signing a new contract.

But he has looked rejuvenated of late and believes England have the potency to cause headaches to most teams.

Rooney said: “I’m enjoying my football and I’ve got a great hunger about me.

“I want to prove myself again and hopefully I’m doing that.

“I feel really good and hopefully I can continue to score goals.

“We have won every away game since the World Cup and as a team are good on the counter-attack.

“The manager has brought some players in and they have done very well and cause problems for teams.

“With the pace of Theo Walcott, Ashley Young and Stewart Downing all breaking forward, it is difficult for teams to defend against us.”

Rooney was employed as the main striker with Young operating behind him in a 4-2-3-1 formation.

He said: “We controlled the game and I enjoyed playing in that system.

“Wherever the manager wants me to play, I’m happy to play and I got chances.”

He said: “Wayne is in such a rich vein of form. You can play him up there on his own or in a partnership. He really makes things happen.

“He gets goals, makes goals and makes our job a lot easier at the back. Wayne is on fire at the minute for club and country.

“You can see it only takes a moment of brilliance for him to have an impact on the game.”

Smalling, who has made his reputation as a centre-half, looked at home in the right-back role he has also been used in by United this season.

The former Fulham player said: “The right-back position is fresh to me in terms of the number of games I’ve played.

“I feel Fabio Capello and Sir Alex Ferguson are great people to be backed by so hopefully I can carry on doing that job.

“I found out I was playing literally just as we were leaving for the stadium so I didn’t have much time to go around texting everybody that I was going to start.

“It was just a case of trying to take everything on board and I’m happy to come off with a clean sheet.”

Smalling added: “Two years ago I came here and made my full European debut for Fulham so I have two great moments to remember this stadium by.

“It helped that I had played in this stadium before and the atmosphere was brilliant then.

“It was pretty intimidating – as it was tonight – but the early goals settled us.”