New Chelsea signing Fernando Torres says he is delighted with his move to Stamford Bridge and is eyeing a long career at the London club. 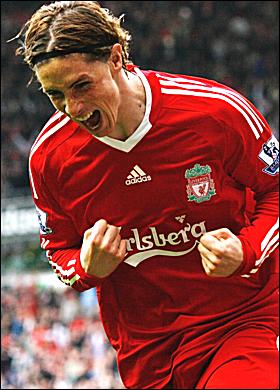 The former Liverpool striker signed a five-and-half-year deal reportedly worth 50 million pounds as Chelsea look to bolster their striking stocks ahead of the knockout stages of the Champions League and the conclusion of the English Premier League campaign.

The 26-year-old said he is looking forward to making an immediate impression at his new club, who face off against Liverpool in the league at Stamford Bridge this Sunday.

“I am very happy with my transfer to Chelsea and I am looking forward very much to helping my new team-mates this season and for many years to come,” he told the Chelsea website.

“Having played against Chelsea many times since coming to England, and in some very big games I will never forget, I know there are many great players here and I will work hard to win a place in the team. I hope I can score some important goals for the supporters to enjoy this season.”

Chelsea chairman Bruce Buck hailed the signing of one of the world’s best players as a major coup for his club.

“This is a very significant day for Chelsea, capturing one of the best players in the world with his peak years ahead of him,” Buck said.

“We have long admired the talents of a player who is a proven goalscorer in English football and Fernando’s arrival is a sign of our continuing high ambitious. I hope every Chelsea fan is as excited as I am with this news.”

Torres, who joined Liverpool from Atletico Madrid in 2007, scored 81 goals in 142 total appearances for the Reds including both goals when the Reds defeated Chelsea at Anfield in November.