Atletico Madrid could still land goalkeeper Thibaut Courtois for next season as he prepares to complete his move to Chelsea. 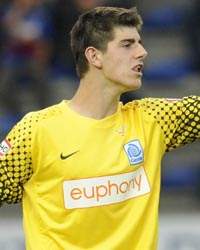 The Barclays Premier League side are reportedly set to send out their new signing on-loan to the La Liga outfit, who were one of the interested parties they beat for the player’s signature.

The Belgian, who is on the verge of finalising his move to Stamford Bridge from Genk, was expected to stay with his current club for the forthcoming season but reports indicate a loan move to Atletico is on the cards instead.

“It is better for me to go to Atletico, I can learn more in Spain than in Belgium,” Courtois was quoted as saying by Skysports.com

“I’ll have to fight for my place, but that is life at the top. The easiest option for me would have been to stay at Genk.

“I could be loaned out for a second or even third season before becoming part of Chelsea’s first-team squad.”

Atletico are in the market for a new goalkeeper after seeing David De Gea join Manchester United earlier this summer.