Tottenham Hotspur know what is coming. Visiting centre-halves will glance up with trepidation on Saturday evening as the man mountain 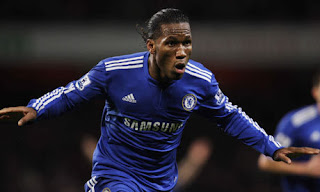 restored as the pivot of Chelsea’s attack steels himself to deliver another bruising. The notion that Didier Drogba was a spent force, his energy critically sapped by malaria and his significance to this side undermined by the mid-season splurge on Fernando Torres, has long since been shattered. The Ivorian is back to his blistering best.

Ferocity has returned to the veteran’s play over recent weeks. Chelsea’s revival, rather lost amid the desolation provoked by Champions League elimination, has embraced seven wins in eight matches with Drogba integral in generating this team’s momentum. The campaign has not yielded the goals of last year, when 37 were scored en route to the club’s first double, but the rampaging forward has softened sides up for others to benefit. There was a goal at Old Trafford, inspirational displays as scorer and provider against West Bromwich Albion and Birmingham, and brawn and focus aplenty against West Ham. “Those performances are his best of the season,” said Carlo Ancelotti. “Now he’s fit, motivated and supporting the team.”

Cynics might suggest the renaissance is conveniently timely. Drogba, like Nicolas Anelka, is out of contract at Stamford Bridge in the summer of 2012, leaving the close season as the obvious opportunity to raise a relatively substantial fee through his sale. Yet, with rivals such as Spurs hinting at interest, it is already starting to feel unthinkable that Chelsea might be prepared to lose a player whose instinct is to extend his seven-year stint in west London. One of his representatives, Thierno Seydi, has confirmed as much. “He stays at this club,” he said. The return to form has served as a reminder that now might also be an ideal chance to open talks over a contract extension.

No meeting has been scheduled to discuss the player’s situation, with so much at Chelsea in a state of flux. Their title defence hogs the focus, the sporting director, Frank Arnesen, is serving his notice period and the manager’s own future will be determined only when the league campaign has concluded. But, where Drogba’s days had appeared to be numbered, now there is recognition of how integral he remains. In this team’s familiar 4-3-3, a set-up into which they have slipped back eagerly, he is the most natural pivot for the front trio. “It is not my job to recommend who should get new contracts,” Ancelotti said, “but Didier was and is important for this club, and will be in future. His body is strong – I would like to have his body – so he could play for longer.”

Yet, even after turning 33 last month, this campaign has proved an education. Drogba’s role at Chelsea has come under scrutiny in the past, most notably during Luiz Felipe Scolari’s brief tenure, but his toils towards the end of last year had observers questioning whether this was truly the beginning of the end. There had been a listlessness to the forward before confirmation came belatedly that in early November that he was suffering from a strain of malaria. Playing through his recovery period, in the absence of other key players and with the team embroiled in a mid-season slump, was admirable but also a toil. There were only flashes of his true quality, too often exposed as false dawns: a goal at White Hart Lane in December, having sprung from the bench, went forgotten when he then missed a last-minute penalty.

The £50m purchase of Torres was not just a reminder that Chelsea are evolving but also an acceptance that this side might not be built around the Ivorian for too much longer. “Competition is a good motivation,” said Ancelotti. “Every player has an ego, above all strikers. It becomes a question of psychology. You have to put in their minds that they must use their individual skills for the good of the team. The difference between a good and a top player is that the best will give his ability to support the play of all the team.”

If the Spaniard represented a threat, Drogba has reacted in the right way. A spell on the fringes has coaxed the best from him again. He started last month’s league matches against Manchester United and Manchester City on the bench to be thrown on against tiring opponents with the scores level. Both games were won. His omission from the starting line-up for the second leg of the Champions League quarter-final at Old Trafford was baffling with the manager subsequently conceding his misjudgment. Now there is a permanence to his inclusion again, with Tottenham braced to confront him.

The dilemma that is the integration of Drogba and Torres into the same side does, of course, linger. They have started three of 14 matches to date but Ancelotti has spent this week exploring a tweak to 4-4-2, perhaps ill-advisedly given how well the team have played in the system that served them so well last season. The pair seem natural lone strikers, one as a battering ram as happy with his back to goal, the other slippery and intent upon exploiting space between full-backs and centre-halves. The difference, for now, is that Chelsea know how to tap into Drogba’s strengths. They are still learning about Torres.

Spurs, too, are aware of the threat Drogba will pose even if the veteran has managed a relatively modest four goals against them in 14 appearances. Yet, if Chelsea are to trim United’s lead at the top to three points, they will look to Drogba to inspire. Reborn and refreshed, he has become integral once again.