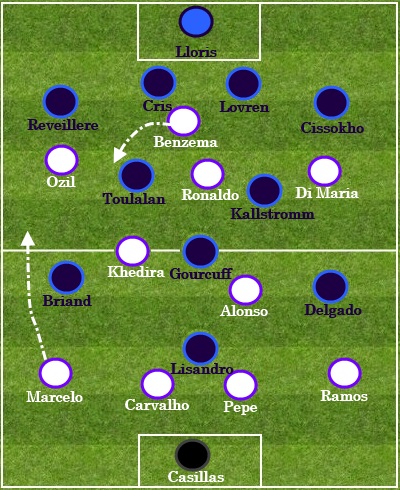 How they lined up

Both sides started with variations of 4-2-3-1. This was arguably Mourinho’s strongest line-up and the one he favours most at home as Marcelo came in for Arbeloa, and Benzema started ahead of Adebayor in the changes to the side form the first leg.

Lisandro ahead of Gomis and Briand for Bastos were the two changes for Lyon from the first leg. Briand played wide right, whilst Delgado replaced Bastos on the left. Both teams deployed two deep lying midfielders but Delgado remained in a central position when the team were without the ball.

After intimating that his side would defend their narrow lead, Mourinho’s side duly took the game to Lyon in the first 15 minutes or so. Marcelo was at his lively best (seemingly taking his first leg snub as a personal affront!), continually looking to link with Ronaldo and the roaming Ozil; both Marcelo and Ronaldo tested Lloris early on, but the Frenchman was in fine form and kept Madrid at bay.

Interestingly, on the other side, Ramos chose to hold the defensive line more than we would typically expect, perhaps aware of Delgado’s threat in tandem with Gourcuff, Lyon’s high playmaker. It was Delgado’s movement off the ball which was crucial to Lyon finding their feet in the game; working with Kallstrom and Toulalan in the centre, the visitors were able to create a defensive shield in which Ozil Di Maria and Ronaldo struggled to penetrate – it wasn’t a classic pressing strategy but instead a zonal marking system rigourously applied starting from Lisandro and Gourcuff  at the top through to Cris and Lovren at the back.

Controlling the game in the centre seemed to rally the Lyon team, as Cissokho pushed on with greater effect seeking to link with Delgado, whilst Reveillere likewise sought to develop an understanding with Briand. But having entered the final third, they were simply unable to unlock the rigid Real defence. Moreover, having earned a number of freekicks and corners, Gourcuff (who was such a threat from set pieces in the first leg) was unable to beat the first man on each and every occasion – for one freekick a quarter of the way into the game, Pepe was dangerously close to earning a second yellow card from referee Skomina, having jumped recklessly for the ball on Lisandro and catching him with a stray right knee.

After a 20-minute spell of dominance it was the home team’s turn to re-emerge as an attacking force. Alonso was seeing more of the ball, and Ozil and Di Maria were trying to pull the Lyon defenders out of position and create space for Ronaldo and Benzema; Just before the break, Marcelo combined very well with Alonso and then Ronaldo to break the deadlock. Having ‘Cruyff-turned’ Lovren beautifully he seemed to hit his shot directly at Lloris, but with the goalkeeper committed the ball found the back of the net.

Gomis replaced Briand at the start of the second half as Puel pulled Lisandro into a ‘false 9’ role behind Gomis, with Gourcuff to the left and Delgado this time to the right.  At 1-0 down, Lyon were essentially still needing to score at least one goal, and so were not overly nervous in the opening exchanges. The game did however inevitably get stretched and this allowed Madrid to exploit the space on the counter attack, as the defensive and midfield lines moved ever so slightly higher up the pitch. There was a warning sign for the tiring Lyon as Ronaldo went close from an Ozil corner, who seemed to completely mistime his jump.

Gourcuff was searching for the ball across the final third but as has been the major criticism of his play in recent times, he failed to exert his influence on the game, as he misplaced passes and became more frustrated as the game went on.  Delgado was having some joy down the right with both Lisandro and Gomis but Madrid’s high line and ability to intercept the ball early often averted the danger with relative ease – the veteran Carvalho was quietly efficient sweeping up anything that came his way.

The Ozil and Benzema wavelength

Alonso and Khedira continued to play the ball down the left side, with Benzema dropping deep and working in close vicinity to Ozil at every given opportunity. It was the Madrid left side where the move for second goal initiated as Marcelo intercepted Delgado splendidly, playing long ball to find the diligent run of Ozil from right to left; Benzema was once again prowling in the German’s vicinity and expertly capitalised on a defensive lapse running through on goal and scoring with his favourite finish through the oncoming keeper’s legs. To their credit Lyon remained ambitious as the game became literally ‘end to end’.  Puel threw on Pied for Delgado and instructed him stay high; Shortly after, Lisandro missed a chance from 3 yards to claw one back which would have set up an edgy last 20 minutes for Mourinho’s men.

However, the game was put beyond doubt, as Di Maria (quiet up until this point) timed a left of centre run to perfection and found the net; Cris had missed a relatively straight forward header from a Casillas dead ball, and with Ozil on hand as ever, he expertly flicked the ball on with his head for the alert Argentinean to finish astutely.

Real Madrid go through to the quarters for the first time since 2004 then, but the game was finally poised until the Marcelo break-through. Toulalan, Kallstrom and Delgado worked tirelessly in the middle of the park, and it perhaps only Gourcuff’s inability to influence the game high up the field that meant they were unable to establish their dominance having had over 60% possession in the first half. The attack-minded Marcelo worked wonderfully well with Ronaldo, but even more so with duo Benzema and Ozil who seemed to collectively target Reveillere at right back; each of the Madrid goals came from that side of the pitch.