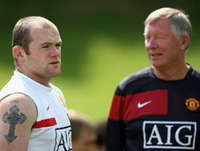 Ferguson ankle injury statement and looks set to put the England forward on a collision course with his boss. Ferguson, 68, revealed the knock, and not a loss of form, had prompted the change when he removed the striker after an hour of last month’s 2-2 draw with Bolton Wanderers. “I think Wayne will be two to three weeks,” Sir Alex Ferguson was quoted as saying by The Times. “It is a straightforward ankle injury. Nobody likes to be injured but he is. There is nothing you can do about it. What do you want me to say? Do you want me to describe every ligament? Christ.”

This saw Rooney left out of the subsequent 0-0 draw with Sunderland but return for England duty this week. Rooney didn’t toe the party line after the stalemate with Montenegro, however. Speaking to Sky Sports News, he said: “I’ve had no problems with my ankle all season.

“I’ve been training for the last two months and I haven’t missed a training session so there’s no problem with my fitness. “I want to keep playing consistently and working hard and I’m sure the goals will come.

‘You need games to get your fitness in. I played a few games and felt I was getting sharp but then missed three or four and then didn’t feel as sharp as I thought I would. “‘You need to play because, if you’re not in full fitness, it’s difficult to break teams down.” This revelation is believed to have lifted the lid on the apparent impasse between the two sides to extend Rooney’s contract that runs out in a year and a half.

In the past, top names such as Lee Sharpe, Jaap Stam and David Beckham have fallen foul of Ferguson and there is reportedly a worry within Old Trafford that Rooney is headed the same way.