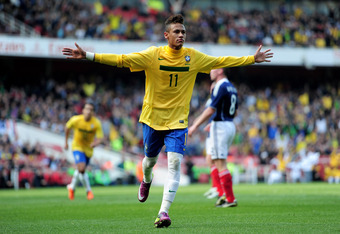 The 19-year-old has been heavily linked with moves to Spanish powerhouses Real Madrid and Barcelona over the past 12 months but has repeatedly stated his commitment to his current club Santos.

Ronaldo, who played for both Madrid and Barca, as well as AC Milan and Inter Milan in a glittering career, is adamant, however, that Neymar needs to leave for Europe to fulfil his vast potential.

“Leaving aside selflessness and patriotism, Neymar has to look at the things which will help him conquer the world,” Ronaldo told ESPN.

“If he can play in Europe the way he does in Brazil, very soon he would be the best player in the world.”

Ronaldo made a similar journey as a 17-year-old in 1994, swapping Cruzeiro for PSV Eindhoven, and very quickly developed into the most feared striker on the planet.

If consulted, the 35-year-old, who retired in February, would be clear in his advice.

“I cannot decide for him,” he added. “But it is clear that if Neymar came to me for advice I would say the best thing is to go to Europe and choose the best team for him.

“I hope Neymar is intelligent and is not just limited to Brazil.”