Ronaldo, the Brazilian whose control, pace and power made him one of the top strikers in the world, is to quit the game at the age of 34. 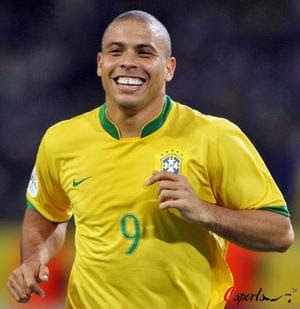 In a brilliant 18-year career in which he played for both Milan clubs, Barcelona and Real Madrid, Ronaldo scored more than 400 goals, including a record 15 at World Cups.

Last week Ronaldo, who was Fifa player of the year in 1996, 1997 and 2002, was blamed by fans for Corinthians’ exit from the Copa Libertadores, Latin America’s most important competition and the only major tournament the Brazilian club has yet to win.

Supporters damaged players’ cars and threw rocks at the team bus and Ronaldo said at the time that the violence had made him consider ending his career.

His retirement comes days after his former Brazil team-mate Roberto Carlos said he was leaving Corinthians because he and his family were being threatened by fans after the Copa Libertadores elimination.

Ronaldo had been expected to keep playing until the end of the year but he is visibly unfit and beset with injuries. He has been struggling to play at a high level and has not scored since last year.

Ronaldo, who thrived in Europe after leaving Cruzeiro for PSV Eindhoven in 1993, played in three World Cups, helping Brazil win the title in 2002 in South Korea and Japan by scoring twice in the final in a 2-0 win over Germany. He returned to Brazil at the beginning of 2009 to recover from a third serious knee injury.