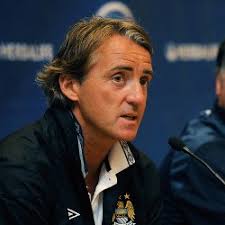 After steering City into the Champions League, Mancini has made four signings since the end of last season, with defenders Gael Clichy and Stefan Savic and goalkeeper Costel Pantilimon joining club-record signing Sergio Aguero at the Etihad Stadium.

But speaking after Sunday’s 3-2 Community Shield defeat, the Italian – who has been heavily linked with Arsenal midfielder Samir Nasri – said: “We need to complete our squad.

“We have another 23 days until the end of the market in order to achieve the target we had at the start of pre-season.”

One man who doesn’t look bound for City is Wesley Sneijder.

Stories from Italy on Saturday suggested Mancini’s men had struck a deal to sign the long-term Manchester United target.

But Mancini said: “No,” he said. “It is not true. He is an Inter Milan player. We never spoke about him.”