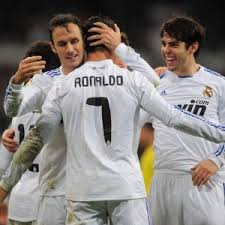 Real Madrid started their season in impressive fashion, netting 10 goals in victories over Real Zaragoza and Getafe, but in the last two rounds Jose Mourinho’s men have lost their way, losing 1-0 at Levante on Sunday and then drawing 0-0 at Racing Santander last night.

That is the first time Madrid have dropped points in back-to-back league games under Mourinho, and the first time they have failed to score in successive fixtures in all competitions since the Portuguese took charge.

However, the last time Madrid were held 0-0 was at Deportivo La Coruna last February and they responded with a 7-0 mauling of Malaga at the Bernabeu in their next match, and the nine-time European champions will be hoping for something similar this time.

Midfielder Xabi Alonso is not expecting it to be easy against Rayo, though.

“We’re not having the best of runs, but we’ve got time to change it. The first thing we must do is win on Saturday,” he said.

“Our matches against Racing and Levante were different, but both opponents did well and we didn’t. We found it hard to create chances to score.

“Rayo are a tough opponent and we can’t afford more mistakes. We mustn’t lose faith; this is a long-distance run and there is still a lot to be played.”

While Mourinho’s men seek a change of fortune this weekend, Atletico will be looking for more of the same when they travel to Barca.

After a slow start, new-look Atletico have begun to click in their last three home matches, netting 10 goals and conceding none in seeing off Celtic, Racing and Sporting Gijon at the Vicente Calderon.

The man at the centre of those triumphs has been summer signing Falcao, who netted six of the 10 goals and also proved a constant menace for opposing defences.

Coach Gregorio Manzano said of the club-record 40million euro striker: “You would have to go back into Atletico Madrid’s history to be able to find a player who, in seven days, has created so many chances, hit the woodwork or had so many goals ruled out, and who has been so effective in such a short period of time as he’s had.

“I’m sure that he’s going to be rubbing shoulders with the great goalscorers of our league like (Lionel) Messi and Cristiano Ronaldo.”

Manzano now wants his side to continue their good form on the road, adding: “The three home games have gone off without a hitch and we must now try to transfer that same form away from home.”

Barca won their last home game 8-0 against Osasuna but had to twice battle back from a goal down to draw 2-2 at Valencia in midweek.

Valencia, who saw their 100% start ended by that result, face another tough encounter on Saturday when they go to Sevilla.

Athletic Bilbao are also in action on Saturday and, having picked up just one point so far, they will be desperate for a win when Villarreal visit San Mames.

Like Athletic, Real Mallorca will also attempt to end a three-match losing run when they face Real Sociedad, while in the other games unbeaten Levante meet Espanyol, Osasuna go to Granada and Racing Santander are away to rock-bottom Sporting, who are the only team yet to record a point.

Also, big-spending Malaga will look for a fourth successive win at Zaragoza, while on Monday Getafe take on Real Betis.