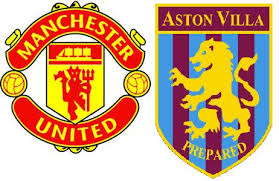 Frenchman Houllier has overseen Premier League victories over the Red Devils manager on five occasions, all of which came during his tenure as Liverpool boss from 1998 to 2004.

It is a record bettered only by Houllier’s compatriot Arsene Wenger, who has led Arsenal to nine league wins against Ferguson’s side, the most of any manager.

But while Houllier’s personal record against the most successful team in Premier League history is solid, Villa’s is anything but. The Midlands club have claimed a solitary win from their last 30 league clashes against United.

It is a dismal record that Houllier’s men were on the verge of improving when the sides last met, only for them to throw away a two-goal lead in the final 10 minutes as United limped away from Villa Park with a 2-2 draw in November.

After overcoming recent struggles that resulted in a brief stint in the relegation zone, Villa have recorded three straight victories in all competitions and will take growing belief with them to Old Trafford.

The forward combination of Gabriel Agbonlahor and new signing Darren Bent will be integral if they are to claim the unlikely three points, particularly given that Agbonlahor has been a constant source of goals against the Red Devils – the speedy striker has netted four of his side’s past eight goals against Ferguson’s men.

However, table-topping United are a daunting prospect at home, where they have won their last eight league games.

Undefeated in the league this season and sitting five points clear of second-place Arsenal, Ferguson’s side are primed to claim their 12th title under the long-serving Scotsman since the inauguration of the Premier League in 1993.

They will be heavy favourites to account for Villa, but may need to get by with a makeshift defence, as Rafael (concussion) and Rio Ferdinand (groin) are both in doubt.

Midfielder Michael Carrick may return following an ankle injury, while Patrice Evra will return to boost Ferguson’s dwindling defensive stocks after missing Saturday’s 2-1 FA Cup win over Southampton because of a family bereavement.

Houllier will have the majority of his squad to choose from for the trip to the North West, with Fabian Delph and Stephen Ireland, both battling knee problems, the only absentees.