Stoke City face the challenge of hosting Chelsea on the opening day of the English Premier League season on Sunday. 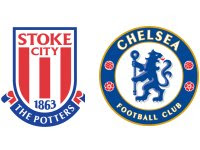 Last season’s runners up will travel to the Britannia Stadium for their first game under new manager Andre Villas-Boas, who took over at Stamford Bridge following Carlo Ancelotti’s dismissal.

Chelsea began last season with a 6-0 drubbing of West Brom on the opening day, but Stoke midfielder Dean Whitehead is confident the Potters will not suffer a similar fate.

“Over the past few years we have progressed remarkably and we now believe that we can beat any team here on our own turf, even the bigger clubs. We want to show people that by getting off to a winning start on Sunday,” Whitehead said.

“Of course it is going to be tough. Chelsea are a top, top football club with world class players and they like us will be desperate to get the new season up and running with a good result.”

“But we do have the belief here that we can win the game. The lads are desperate to continue on from last season and keep pushing forward.”

Stoke finished 13th last term, and manager Tony Pulis has added Jonathan Woodgate and Matthew Upson to his squad in an effort to reinforce their defence.

Pulis will have to do without Ricardo Fuller and Danny Higginbotham, however, with the pair both still recovering from injury.

For Chelsea, the match presents an opportunity to start fresh under a new manager after the disappointment of falling short of the title last season.

Blues’ fans will no doubt be hoping striker Fernando Torres can rediscover his best form after a season to forget, while big things are expected from new signing Romelu Lukaku, who scored 20 goals for Anderlecht last season despite being just 18 years old.

Ghanaian midfielder Michael Essien is still unavailable as he continues his recovery from the serious knee injury he suffered last season, while illness could sideline Frank Lampard.

Chelsea have won all five of their pre-season matches, and first-team coach Steve Holland said the players were excited to start the new season.

“We’re all excited about getting up and running,” Holland said. ‘It’s always great to get that first game done, you can train and train but in the end it’s about games.”