Chelsea goalkeeper Petr Cech confessed that as soon as he starts to doubt whether he should put his body on the line, 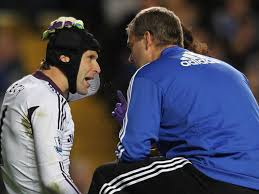 he will leave the game.

The 29-year-old required emergency surgery in 2006 following an incident with former Reading midfielder Stephen Hunt, where the Czech keeper was kicked in the head, fracturing his skull.

Since the accident, Cech has played wearing protective head gear, but has not lost any of his bravery, an aspect of his game clearly marked with his collision with Fulham’s Orlando Sa in last week’s Carling Cup tie.

Cech was rushed to hospital after suffering concussion, which left him with blurred vision, preventing him from continuing in the game.

“I had a concussion last week,” he said.

“When I came inside to the dressing room I couldn’t see properly and I didn’t have the awareness of the space.”

“My head was shaken. I could feel it but when I stood up I was fine. At that point I was absolutely fine.”

“But at half-time as soon as I sat down I couldn’t stand up. I went to hospital and had a scan. With my history they were not taking any chances.”

“There was no way I could continue although I had played for the last two minutes of the half.”

“I thought I would be all right but as soon as I got into the dressing room it was clear that my head wasn’t working the way it should. So we decided not to play because it would have been really stupid for me to carry on.”

“The procedure is the same with any player who has concussion, just to make sure nothing is happening inside. But all was clear and I was able to train on Friday.”

The Czech international was fit for Saturday’s Premier League tie with Swansea and is excited to return to the side ahead of their Champions League clash with Valencia on Wednesday, but admits that as soon as fear creeps into his game, he may have to retire.

“I had a headache on Saturday morning and we weren’t sure if I would be able to play. I went out for the warm-up and we said ‘if I’m OK in the warm-up then I play. But if I’m not right I’m not going to play’. So I did the warm-up and I was OK to play and I was fine,” he said.

“At the time it was more the emotion because my head went back like when you get a right hook in boxing. What happened I don’t know. I think the helmet took most of the impact. As I said, I thought I would be OK I just didn’t know if I would be ready to play.”

“When I played again after my first injury I said if I need to put my head somewhere I will do it. It’s part of the game.”

“One day if I feel the fear of putting my head in the middle of some battle or scrum, then I stop. But so far I haven’t felt that.”

Cech has been one for head injuries during his career, as can be seen from the scar under his lip following a training ground injury after being kicked by a team-mate.

But the six foot five keeper does not let these knocks affect him, adding: “What can I say about the scar?”

“This is football and things like that happen. I’m unfortunate that I always get a nice knock with a nice scar.”

“Let’s put it right. You can’t be naive and stupid to do things you shouldn’t.”

“That means on Saturday it would be stupid for me to play a game if I was not right. If you’re not right you can make a mistake that will cost your team-mates a game. So I have full awareness of what is at stake and I was fine and decided to play.”

“My wife just said it was lucky she wasn’t at the game and didn’t see it.”

“Every time something happens like that it reminds her of 2006. Luckily she didn’t see the game. She was looking after the kids.”