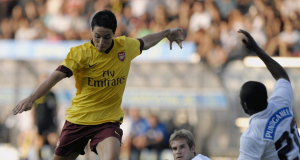 Speculation has surrounded Nasri’s future in North London, with the midfielder refusing to sign an extension on his contract.

Manchester United have expressed an interest in signing the midfielder and Evra revealed that he had been talking to his France team-mate about making the switch.

“I’ve talked a lot with him in the holidays and told him how great it is to play for Manchester United and how important it would be for him to become one of the biggest players in the world,” Evra said.

“I remember I made that little joke saying that he’s a prince now but if he wants to be the king then he has to join Man United.”

Evra said that he told Nasri that if he wanted to win trophies, Old Trafford was the perfect destination.

“I said, ‘If you want to win trophies, you have to come here’. In five years I’ve won 12 trophies and I don’t know if I’d have won more than that with another club. So I just told him the truth,” he said.

“I don’t know how negotiations are at the moment but he has a lot of clubs interested in him and he has to think. I just told him how good it would be for him coming here. He will have a nice welcome and I can help as well because I’m French.”

“We’ve spoken a lot in the summer and also when we met up for friendly games with France at the end of the season. It was looking interesting but I don’t know, we’ll have to see.”

Manchester City have also been linked with signing Nasri, but Evra said if he was given the choice he would pick Sir Alex Ferguson’s side any day.

“If he goes to City it’s his choice. But I know, as a player, if I have Manchester United and Manchester City, I’d go straight away for United.”

“It can be for the money. But I’d prefer to go for the glory. He said it’s a privilege a club like United want him but he has to think about his future and talk with his agent.”