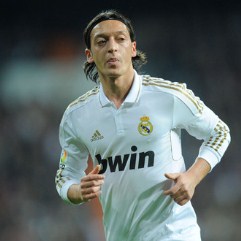 The Germany international joined Real Madrid from Werder Bremen in the summer of 2010 and has since developed into a key player under the guidance of Mourinho.

“He has had a huge impact on me. I want to thank him for putting his faith in me. That has really helped me develop as a player. I am very happy to train under him and continue to develop,” Oezil said.

“It’s quite easy for me to play with attackers like them. They are always available and are very fast and clinical in front of goal. It’s a joy to play alongside them,” he said.

Oezil has made 14 La Liga appearances in 2011-12, but has yet to score his first league goal of the season.