Nicklas Bendtner has articulated his frustrations once again with his fringe role at Arsenal, admitting he is “not satisfied” and suggesting that he 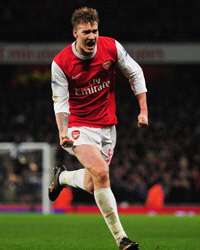 cannot tolerate playing out of position.

The Denmark centre-forward has never made any secret over where he sees himself in Arsène Wenger’s starting line-up but, to his dismay, he has often been used on the right flank.

Wenger has said he will meet Bendtner at the end of the season to discuss his future and, as he plans to make changes to the squad, he would like to keep him at the club. But the 23-year-old, who signed for Arsenal in 2005, has made it clear that he cannot wait indefinitely for his opportunity. Bendtner has started only three Premier League games this season.

“I’m concentrating on getting the Champions League place and then we’ll do the evaluation at the end of the season. It’s certainly not the best thing for me but it’s not up to oneself and sometimes you have to adapt to what the manager says.”

To his irritation, Bendtner, who is synonymous with self-confidence, has found himself behind Robin van Persie and Marouane Chamakh in the pecking order for the lone striker role in Wenger’s formation.