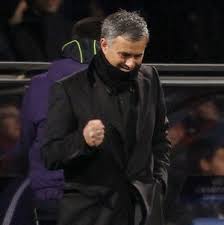 Mourinho was criticised for his defensive tactics in Saturday’s 1-1 league draw against Barcelona. The Madrid honorary president, Alfredo Di Stéfano, and Johan Cruyff hit out at the Portuguese coach, with Cruyff saying Mourinho worked only for titles and was not a “football coach”.

Mourinho said on Tuesday that Di Stefano’s remarks were respected but that he was the coach and he would decide how the team would play. He did and it worked. Mourinho’s plan to play without a natural striker with Cristiano Ronaldo filling the role and to use constant upfield pressure forced Barcelona off their usual short passing game. The Spanish champions uncharacteristically gave away possession and even resorted to sending long balls forward in attack.

“They played similar to Saturday’s draw,” said the Barcelona coach Pep Guardiola. “They changed players but the concept was pretty much the same as the Bernabéu.”

Madrid were unlucky not to be ahead before Ronaldo headed Angel Di María’s 103rd-minute cross into the goal to secure Madrid’s 18th domestic cup and the Portuguese coach’s fourth in four different leagues. “This is such an important goal for Madrid,” the Portugal forward said. “It’s one to remember.”

Mourinho delivered again, ending a three-year silverware drought for the Spanish giants. “The title isn’t just mine, it’s everyone’s. After so long without the Copa del Rey, it’s nice,” Mourinho said. “This has nothing to do with titles, this has to do with changing the structure of how the club works, the mentality of people.”

Thousands of ecstatic fans gathered at the Cibeles fountain in Madrid to celebrate and the captain, Iker Casillas, draped a club flag and scarf around the goddess’s neck at around 4.15am local time after the victorious team arrived back in the Spanish capital.

Casillas and Sergio Ramos – who managed to drop the trophy from the team’s open-top bus parade – were effusive in their praise for Mourinho, who joined Real after leading Inter to an unprecedented treble of Italian league and cup, and Champions League last season.

“He is a phenomenon,” Casillas said in the depths of Valencia’s Mestalla stadium as the Real fans continued their celebrations in the streets outside. “He is the captain of the ship and with his philosophy he tries to instil values in us that have served us extremely well,” added Ramos.

Real still have a slim chance of matching Inter’s treble, although Barça’s eight-point lead in La Liga with six games left looks to have put the title beyond Madrid’s reach. Wednesday’s Cup triumph, their first since 1993, will nonetheless lift the players for the two-legged Champions League semi-final against Barça at the Bernabéu on 27 April and Camp Nou on 3 May.