Ancelotti’s team ended the last campaign as Premier League and FA Cup champions – inflicting home and away league defeats on United in the process, as well as winning the Community Shield. But they had no answer to a United team inspired by the evergreen Paul Scholes, who controlled the contest from midfield with a superb passing display.

On an afternoon when England’s World Cup flops were booed by the vast majority of the 84,623 inside 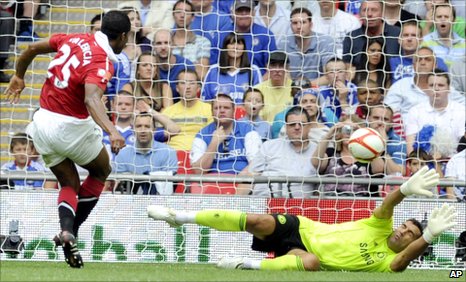 Wembley, Wayne Rooney played a superb low pass for Antonio Valencia’s opening goal. United received a further fillip when new signing Javier Hernandez scored a somewhat fortuitous goal after coming on as a half-time substitute. Chelsea, who found Edwin van der Sar in impressive form, pulled a goal back late on through Salomon Kalou after the Dutch keeper had made a brilliant one-handed save from substitute Daniel Sturridge. But substitute Dimitar Berbatov extinguished any slim hopes of a Chelsea comeback with an exquisite lob from Nani’s cute pass in the final minute to complete a successful afternoon for Sir Alex Ferguson’s team.

The match enjoyed a particularly lively opening period, during which both teams had clear chances to open the scoring. Valencia did not put enough purchase on an attempted lob, while Scholes wastefully – and somewhat uncharacteristically – volleyed well wide after he had been picked out completely unmarked 16 yards from goal. Chelsea, with Nicolas Anelka at the tip of an attacking trio that also comprised Florent Malouda and Kalou, quickly responded.

The first blow of what is sure to be a long battle has been landed by United Van der Sar, with a rare handling error, failed to hold a long-range strike from Anelka, but Kalou could not convert the rebound from a tight angle. If the Dutch keeper had been less than assured with Anelka’s strike, he was simply sensational as he palmed clear a goal-bound header from Branislav Ivanovic with one hand. On a warm Wembley afternoon, the tempo noticeably dipped as the opening half wore on, but there was still a series of breathtaking passes from Scholes to savour. His deft chip played Rooney through but the striker could not find the target from an acute angle, while several times the veteran midfielder caught left-back Cole out of position with raking cross-field passes. From one of them, Rooney played a precise first-time cross that Valencia converted for the opening goal four minutes before the break. Chelsea, who defeated Portsmouth to win the FA Cup on their previous trip to Wembley in May, responded after the restart, with Malouda and the fit-again Michael Essien shooting narrowly wide from long distance, while Van der Sar denied Kalou and Cole, who was later booed from the field as he was substituted. United had made a triple change at the break – with Hernandez soon into his stride on his first major outing since joining from Mexican side Guadalajara.

The diminutive forward showcased a series of flicks and spins, as well as a speed and willingness to create space. But he was lucky with his goal, snatching at a Valencia cross only for the ball to strike him flush in the face before deflecting into the net. Chelsea responded, with Van der Sar twice denying the lively Sturridge but unable to prevent Kalou from slotting home a rebound. It looked as though the Blues might find an equaliser but the prospect of a fourth penalty shoot-out in as many years ended with Berbatov’s crafty lobbed finish in injury-time.

Some Naijabet users are really smiling for this match scores.