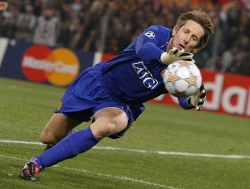 will retire at the end of the current season, his management agency confirmed on their website on Thursday.

40-year-old Van der Sar has been at Manchester United since 2005 and has won three Premier League titles, a Champions League title and a League Cup at Old Trafford.

According report, Van der Sar will step aside in order to spend more time with his wife, who suffered a brain-related illness around a year ago.

Sir Alex Ferguson saying, “I have come to accept this will be Edwin’s last season. It’s sad but the difficulty for a goalkeeper when he gets to 40 is something which happened with Peter Shilton.

“All of a sudden, because of age, Shilton’s form just collapsed and I don’t think Edwin would want that. He is such a proud man and it’s going to be a big loss.

“We had a chat last season about how he saw his future and he explained to me his plans, and nothing has changed from then.”

Ferguson explained that Van der Sar was unlikely to stay at Manchester United as a goalkeeping coach, due to family commitments.

Ferguson continued, “It’s difficult because he has his wife’s health to consider after her -illness.

“She is fine now and seems to be really good but she still has treatments to get in Holland, with physiotherapy and things like that. So for him to be here with us would be difficult.”

Manchester United have just confirmed the signing of Danish stopper Anders Lindegaard , although he is expected to be the number two choice at Old Trafford.  Ferguson confirmed that the search for Van der Sar’s replacement is on.

He said, “We haven’t finalised our thoughts on the goalkeeping situation.

“Edwin has massive experience and you can’t buy that, so it’s a difficult one because he has been a great goalkeeper and will be hard to replace.”