Roberto Mancini has challenged his Manchester City players to rid themselves of what he perceives to be an over-dependence on Carlos Tevez and show they can cope without their leading scorer. 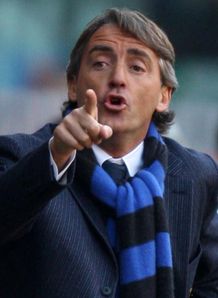 Tevez will be suspended from tomorrow’s game at West Ham United, his former club, after picking up five yellow cards, depriving City of a striker who has scored 33 goals in 50 Premier League appearances since arriving from Manchester United. There has been only one match since January, the 2-0 defeat of West Bromwich Albion last month, when City have won without Tevez scoring, and Mancini admitted being concerned about such a heavy reliance on one player.

“This is a time when we have to try to win without Carlos,” he said. “Carlos is a fantastic player, one of the most important players in the world and, for us, very important. But it’s important that the other players step up now. We must improve and it’s important we start to score through the other players: Mario [Balotelli], Yaya [Touré], Jô, [Adam] Johnson.

“Carlos is very dangerous in the box for our opponents, but if we continue to play football like we did against Bolton Wanderers [City beat them 1-0 on Saturday] I think we can win without him.”

Tevez has scored almost half of City’s league goals – 10 of 21 – and only two of Mancini’s other players have scored more than one, Balotelli and Touré each with two. Balotelli has missed a large proportion of the season with a knee injury and, in all competitions, has five goals in only seven appearances. He will move across from the left side of attack to deputise for Tevez at Upton Park and, though the Argentinian’s absence is an obvious loss, the club’s first-team coach, David Platt, has described Balotelli, a £25m signing from Internazionale, as their most natural finisher.

“I agree,” Mancini said. “If Mario plays near the goal he can score a lot of goals. He has to learn about the Premier League because it’s a different competition to other countries but he’s young and he’s improving.”

Aleksandar Kolarov is also suspended for the trip to the Premier League’s bottom club and Emmanuel Adebayor has not trained all week because of an injury. Kolo Touré came off early in the defeat of Bolton with a groin problem but trained yesterday and should be fit for a match that, if City win, would put them level on points with Arsenal at the top of the table.

“Saturday will be a tricky game because I don’t think West Ham deserve to be at the bottom,” Mancini said. “They have good players and a good manager so it’s a strange situation. There was a warning [to City] when they beat Manchester United in the Carling Cup but they have actually played well for the last month. We will need to play very well if we are going to win there.”