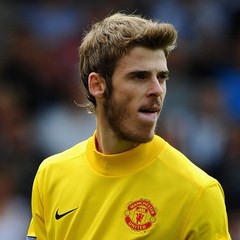 De Gea has endured an uncomfortable start to life in England following his £18.3 million switch from Atletico Madrid in the summer and has been criticised for letting in three soft shots in his first four appearances for United, as well as looking suspect when claiming crosses.

The Spaniard can expect to be put under pressure against Bolton and Davies has confirmed the 20-year-old keeper will be tested.

“I’m sure there’ll be a few crosses going in,” Davies said. “United at home is one we all look forward to and we fancy our chances against anyone here.”

However, De Gea insists he will not let his shaky start to life at Old Trafford affect his confidence, insisting he has what it takes to be a “key player” despite the “pressure” of playing for one of the world’s best clubs.

“It’s about improving in every training session and every match but, above all, keeping intact my confidence in my abilities and in what I can bring to the team.

“It is hard to arrive in a different country and with a different language but, little by little, I’ll be getting it. I do not worry.”

Davies claims United’s other young stars can also expect a “going over” at the weekend, in particular his direct opponent, new United centre-back Phil Jones.

“He’s a big strong boy, so this is another one I’m looking forward to,” said Davies. “I relish these kind of challenges, he’s coming on as a player and still young, so I’ll be trying to give him a going over.”