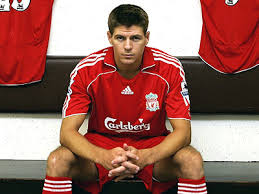 reiterated that he is happy with his progress.

The club announced on November 1 that Gerrard was undergoing treatment for an ankle infection after he was pictured with a protective plaster cast over his right foot. He suffered a cut to the ankle in training which became infected.

Gerrard had only recently returned from a groin problem that kept him out of action for six months.

It was suggested in a statement released by the club that he could return after the international break, but he was not in the squad for the win at Chelsea. And Dalglish revealed that Gerrard will not be rushed back as it approaches a month since he was sidelined.

Dalglish said on Thursday ahead of the weekend meeting with Man City: “Like we’ve already said, we are delighted with the progress he’s making and we’ve said that we won’t put a date on his return – and we won’t put a date on it now. We are very happy with his progress. Everyone is available (for Sunday) apart from Steven and Jack Robinson.”