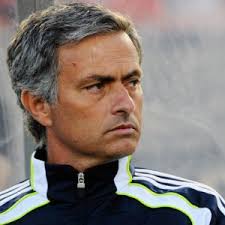 Mourinho’s team were knocked out 3-1 on aggregate in the tie but it was the first leg at the Santiago Bernabeu on April 27 which was filled with controversy.

UEFA’s Control and Disciplinary Board handed Mourinho a five-match ban, inclusive of the one he has already served during the second leg at the Nou Camp on Tuesday and a 50,000 euro fine.

A statement from the club on Friday read: “Madrid coach Jose Mourinho, who was dismissed from the bench in the first leg and made an inappropriate statement at the post-match interview, has been suspended for the next five UEFA club competition matches for which he would otherwise be eligible.”

After the 2-0 loss on April 27, Mourinho was critical of German referee Wolfgang Stark.

“As soon as Pepe was sent off, all of their (Barcelona’s) problems were solved,” Mourinho said after the game.

“If, in a sporting sense, it’s difficult to turn this around, I would say it’s now mission impossible.”

“If we go there (Nou Camp) and score a goal, they will kill us again. We have no chance. They have to get to the final and that’s that.”

Defender Pepe was suspended for one game after his challenge on Barcelona full-back Dani Alves saw him shown a straight red card in the clash, meaning he has already served his suspension.

Real Madrid have been fined 20,000 euros for the ‘improper conduct’ of their fans.

Barcelona’s Pinto was given a three-match ban after he received red for his involvement in a half-time scuffle and he too has already served one of those three games.

The recipients have three days to appeal their bans.