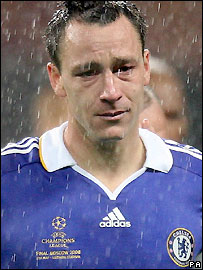 captaincy to Rio Ferdinand. The Chelsea defender was stripped of the role after allegations appeared in the press regarding his private life and he said that Fabio Capello made the decision because the manager wanted to remove him from the media glare.

“I understood the decision at the time,” said Terry. “Fabio said he wanted to take the spotlight off me, although if I am honest I thought it had the reverse effect. But I would never dislike him for that. He is the manager, he lives by his decisions. People presume we fell out, but there was no shouting and screaming the day he told me. I accepted it. I said to Fabio I would continue to train and play exactly as I had before, then we shook hands and that was it.”

Terry added, in an interview: “I suppose the only time I felt disappointed was during the next game against Egypt, which was a friendly, and the armband got passed around between five or six players. I just felt, ‘OK, I’ve been stripped of the captaincy, but don’t take the piss out of me.’ Fabio had told me I was still a big voice in the dressing room and he wanted that to continue, but on the night it felt the opposite.

“Had I got the armband third, even fourth, I would have been happy, but Steven Gerrard was captain and first he went off, then Frank Lampard got it, and then Lamps went off and they gave it to Gareth Barry, and then he went off and it was anybody’s. I think they would have given it to one of the stewards ahead of me. Even if it was a friendly, we were still there to win and you should put your best people in charge.

“People might not like to hear this, but I just thought it was a little disrespectful. I had no choice but to get on with it, though. That is how I feel now. I don’t envisage I will be captain again, but for two England managers, Steve McClaren and Fabio Capello, I was their first choice and I’m proud of that.”

Of his so-called rebellion at the World Cup in South Africa he said: “I think people didn’t understand what I was saying at the World Cup, they saw it as a challenge to Fabio, as if I was trying to take over. But I wasn’t shouting my mouth off. I was an England international who was possibly going to play his last World Cup game for his country that week. The same for Steven Gerrard, Frank Lampard, a lot of guys in that squad. We were in the last-chance saloon. Of course I was going to speak my mind in those circumstances.

“Yes, maybe I could have been a little more sensitive. The impression I got was that people were asking, ‘Who does he think he is?’ but at the time it happened the first reaction of a lot of people was that it needed to be said. Then, within 15 minutes, a positive had been turned into a negative and it was portrayed as an attempted coup.”

Terry is currently sidelined with a nerve problem in his right leg which has been bothering him for the past seven months and is due to make another trip to Italy in an attempt to identify the problem. “I saw a specialist in London yesterday, which was encouraging, and I will go back to him today. Then I will travel to Italy again next week for further treatment,” he said. “We do not know enough yet to make any estimates about my return. The good news is that none of the specialists believe it is related to my back injury, so now we go from there.”