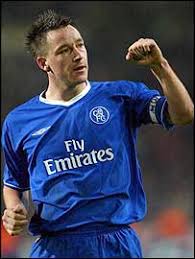 England international Terry, who made his debut in October 1998 against Aston Villa in the League Cup, came through the ranks at Stamford Bridge and has worn the skipper’s armband since 2004.

His rise coincided with the arrival of Russian billionaire Roman Abramovich, who bought the club in 2003, and the 30-year-old has enjoyed considerable success since being made captain – winning three Premier League titles, three FA Cups and two League Cups.

Terry, who led his team to victory over Tottenhm on Saturday, said: “When I was 18, on 30-odd games, I could never have predicted where I am today.

“But throughout my career – I’ve been the most successful captain in Chelsea’s history. And for me, when you go down in history at a big club like this, it means an awful lot and it’s something I hold dear.”

Terry is now fifth in Chelsea’s all-time appearance list behind Ron Harris’ 795-game record after notching up 500 outings for the Blues and he intends to play on until at least 2014, when his current contract expires.

“I’m delighted to hit 500. I’m very proud. I’ve got a great rapport with the fans and I want many, many more games. I’ve got three years left on my contract and that’s what I intend to do.’

The England defender, 30, also looked back over the best and worst moments of his club career and added: “My top moment would have to be the Barcelona game when we beat them here [at Stamford Bridge] and I scored the winner.

“The low point is obviously the Champions League final, missing the penalty [in the shoot-out defeat to Manchester United].”