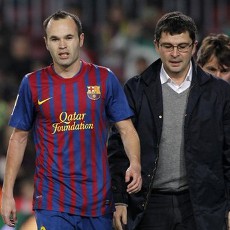 Iniesta collided with Hospitalet goalkeeper Carlos Craviotto midway through the first half, forcing the midfielder to be substituted. Barcelona later allayed fears by stating on their official website that Iniesta’s injury was not as serious as first thought.

The reigning European champions will rest during the festive season, with their next game not until January 8 when they take on Espanyol.

As Iniesta races the clock to be fit for their next encounter, Pep Guardiola hailed his side’s attacking attitude against Hospitalet.

“We went for the ball, and never let our guard down,” Guardiola said. “I did not want our team to slip up. We wanted to put the triumph in the cup [Club World Cup] behind us. We came from a long flight, and I asked my players to take the game seriously.”