Carlo Ancelotti admits he is lucky not to have been sacked as Chelsea manager but the Italian concedes he will have to “pay the bill at the end of the season” if the champions do not achieve success. 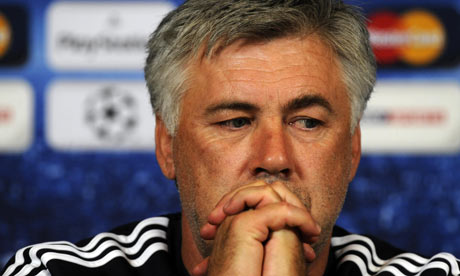 Chelsea have taken only 10 points from their past 10 games as Ancelotti fights to recapture the form that allowed his team to win the Premier League and FA Cup Double last season. After dropping only four points from their first 10 matches of the season to lead the title race, the slump in form has caused them to drop to fifth place, six points behind the leaders, Manchester United.

Speaking before tomorrow night’s trip to Wolverhampton Wanderers Ancelotti was asked if he would have been sacked in Italy with a return of 10 points from 10 outings. “Depends. I am [a] lucky man. I understand that lot of coaches are sacked with these results,” he said, before saying that he was unsure if failure to qualify for the Champions League would result in him losing his post.

“It is difficult to say now. We have to think now we can win the title again, but the most important thing is to stay in the places to be in the Champions League. I am not worried. We have the skill and the ability to stay in the top four without a problem. When you go to a restaurant, you have to pay the bill when you finish your meal. It’s the same here. We have to pay the bill at the end of the season. At the end the club can judge my job and everything.”

Asked what would happen if Chelsea were defeated by Wolves, Ancelotti was adamant this would not occur. “We will not lose. We will win. I’m confident. We are improving and the team is very close to moving on from this moment.”

He denied that many of his senior players are now too old but he did accept that given current form he could understand if questions were raised regarding the issue. Of his core operators John Terry, Ashley Cole and Florent Malouda are 30, Nicolas Anelka is 31, and Frank Lampard and Dider Drogba are 32. “If you have to judge players now, you can say that they are old and have lost motivation and are not good players,” Ancelotti said.

“But you have to wait and calm down and be able to think that these are fantastic players, as I am sure they are. Nothing has changed in two or three months. Physically [there has been] no problem. [They have] showed good condition. In the second half against Aston Villa [on Sunday] there was more intensity [so] no problem [with] recovery. The problem was the result. I am disappointed by the result because we conceded in the last minute [to draw 3-3].” Pressed if he had concerns regarding some of his squad’s ages the manager said: “No.”

Ancelotti would not be drawn on how many players he hopes to recruit in the current transfer window to strengthen a Premier League squad of 19, which includes three goalkeepers. But he did not rule out spending £20m or more on a player. “Chelsea doesn’t look to the price. If the player is good and we think the player is good for this team, we don’t have a problem.”

Chelsea are light in central defence as Terry can be injury prone and Alex has been sidelined for six games with a knee problem. Ancelotti was asked if he had an interest in Gary Cahill of Bolton Wanderers. “Cahill is a good player but there are a lot of good players in England and Europe. If we want to do something we are able to,” the Italian said. “This is private and confidential, we are looking at a lot of players to find the right solutions but [it is] difficult for me to speak about players we want to buy, because if we speak the price goes up. No other reason.”

Ancelotti added that Daniel Sturridge will not be leaving on loan this month: “He didn’t ask to go on loan and if he did I would say: ‘No way.'”