Barcelona coach Pep Guardiola has made his side’s intentions clear at the Club World Cup – victory. 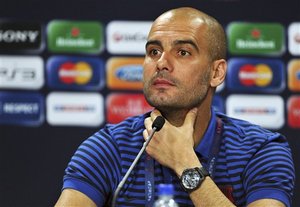 The European champions open their campaign in Japan against AFC Champions League winners Al Sadd of Qatar on Thursday in the semi-finals, with questions being asked in the press over the importance of the competition given the La Liga outfit’s already congested fixture calendar.

But Guardiola – who guided Barca to a win in the competition in 2009 – assured reporters that his side is taking the tournament seriously.

“We are here because we earned it and now we will work to take the title,” he said.

“It’s all much more even, anything can happen in a game; we must not take victory for granted.”

“It is the competition I am most excited about this year because we’re able to play in it. Getting here has been very complicated, very hard.”

Guardiola also denied that club is ready to cash in on forward David Villa in the January transfer window.

Marca reported earlier on Wednesday that Barcelona are planning to sell the Spain international to the highest bidder from the English Premier League, with Chelsea and Liverpool reportedly interested in Villa’s services.

But Guardiola has stressed that there is no truth in the rumour.

Villa, 30, joined Barcelona from Valencia for a fee in the region of 40 million euros before the 2010/11 season and immediately became an important first-team member of the club.

But he has has been struggling to secure a regular berth in the starting XI in the 2011/12 campaign, due to the competition for places following the arrivals of Alexis Sanchez and Cesc Fabregas.