While occasional freak results are part of what make football great, the most shocking 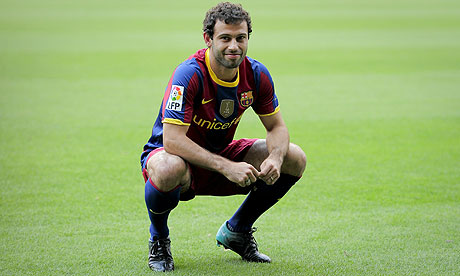 aspect of Blackpool’s triumph over Liverpool at Anfield was that it was no freak. Ian Holloway’s men made a mockery of their 10-1 odds to run out thoroughly deserving winners yesterday afternoon and it is perhaps unfortunate that the post-match spotlight has inevitably focused on the shortcomings of their hosts instead of Blackpool’s marvellous win. It is a measure of how far Liverpool have fallen under the stewardship of their unpopular American owners that they were comprehensively outplayed, outpassed and outwitted by a team that finished sixth in the second tier last season.

Liverpool’s problems on and off the pitch are myriad, but one of the more obvious is the gaping Javier Mascherano-shaped hole in a midfield that was completely over-run by such household names as Charlie Adam (£500,000), David Vaughan (£200,000), Luke Varney (on loan from Derby County), Elliott Grandin (free) and Gary Taylor-Fletcher (free). The mood of Liverpool supporters left aghast at the absence of a decent enforcer to put a stop to the gallop of their opposition will not have been brightened by the sight of the pint-sized Argentinian snarler haring around the Nou Camp sward, winning tackle after tackle in his new club Barcelona’s surprise 1-1 draw with Real Mallorca last night.

2) Arsène Wenger’s myopia has been replaced by hallucinations

When it comes to being delusional, the Arsenal manager is beginning to make the Black Knight from Monty Python and the Holy Grail resemble a gritty realist. While the famously invincible guardian of the wooden plank went to great lengths to downplay the lopping off of his arms and legs by King Arthur, he was at least prepared to acknowledge the injuries he’d sustained. In stark contrast, Wenger was unwilling to even countenance the view that his team might have been second best at Stamford Bridge despite all available evidence to the contrary, having apparently hallucinated his way through an encounter in which only he saw Arsenal dominate throughout, keeping Chelsea “on the ropes for long periods”. Eh?

Despairing Liverpool fans will be heartened to hear that since the invention of football by Sky Sports in 1992, there has at least been one season when none of the three teams occupying the relegation places on this date has gone on to be relegated: 1994-95, when Sheffield Wednesday, Coventry City and Everton all stayed up. In the 17 other seasons, at least one of the three teams below the thick black line on this date have failed to claw their way to safety, while on two occasions – 2006-07 and 2004-05 – all three teams in the drop zone on 4 October ended up plunging into the abyss.

While history suggests that at least one of Liverpool, Wolves and West Ham will find themselves playing Championship football next season, with seven games of this campaign played, the standout relegation candidates have yet to present themselves. With Liverpool approaching financial Armageddon and the white-hot pre-season favourites for the drop such as West Brom and Blackpool making fools of those of us who predicted they’d embarrass themselves in the top tier, the relegation run-in could be one of the most exciting for years.

With Arsenal remaining very much a work in progress and Manchester United struggling to dominate matches you’d expect them to win doing cartwheels, Manchester City appear to be the only team capable of giving Chelsea a run for their money in the title race. But despite all their gazillions, they were forced to rely on the charity of referee Martin Atkinson to eke out a narrow victory at home to a Newcastle United side that, routs of Aston Villa aside, hasn’t been pulling up too many trees. As if losing Hatem Ben Arfa to a broken leg wasn’t depressing enough, Magpies fans were left seething by two extraordinary decisions by the official from West Yorkshire that gifted all three points to their opponents.

City’s first goal came from a penalty that should never have been awarded, with Atkinson pointing to the spot after Mike Williamson had won the ball cleanly from Carlos Tevez with a perfectly fair challenge a yard or two outside the box. Moments after City had taken their 2-1 lead, Atkinson compounded his error by denying Shola Ameobi a penalty when the striker was quite obviously tripped in the City penalty area by Joleon Lescott. Cheated out of a share of the points and with one of his best players crocked by another one of Nigel De Jong’s robust challenges, the Newcastle manager Chris Hughton displayed admirable restraint in limiting his description of Atkinson’s incorrect calls to “horrendous”.

While the brown stuff regularly hits the fan, it doesn’t hit the pampered and cosseted multi-millionaire footballer anywhere near often enough. So it was with no little amusement that football supporters the length and breadth of the country greeted the news that the kick-off of Sunderland’s scoreless draw with Manchester United was delayed after a burst pipe in the visitors’ dressing room had showered the designer duds and washbags of Rio Ferdinand and chums with a torrent of foul raw sewage. “Thank goodness we weren’t all sitting down underneath the ceiling when it happened,” mused John O’Shea, echoing the sentiments of assorted Manchester United staff and absolutely nobody else. If goodness should be thanked, it’s that the Sunderland chairman Niall Quinn spent that spare £13m on Asamoah Gyan instead of calling out a plumber.