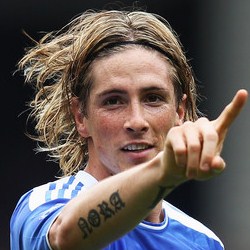 Saturday saw Torres experience the ultimate highs and lows for the second successive weekend after he got himself sent off for an ugly lunge on Swansea’s Mark Gower.

The striker had just scored his third Chelsea goal and played a part in Ramires’ second but he made headlines once again for all the wrong reasons, much as he had done by missing an open goal after netting in the defeat at Manchester United six days earlier.

Those are merely the latest calamities to befall the club’s record signing since his January move from Liverpool, with the 27-year-old taking an incredible 13 games to break his duck, as well as being quizzed by manager Andre Villas-Boas about an interview which – once translated by his own website – contained criticism of his team-mates.

Yet, throughout all his travails, Torres has enjoyed virtually unwavering support from the Chelsea faithful, something that has not gone unnoticed by the striker.

He told Chelsea TV: “Obviously, when you are doing great, scoring goals from the first day and doing good performances, it’s easy for the fans to love and support you.”

“But the first six months for me at Chelsea have been very, very difficult and I have been struggling, and I have always had the support of the fans.

“From the first day till now, every time I talk with them on the street, the cafe, everywhere, I can feel the support they are giving me so it is nice to start scoring for them.”

Apart from Wednesday’s Champions League trip to Valencia and the other upcoming Group E game against Genk, Torres will have to cope without their adoration for the next month as he begins a three-match domestic ban.

The striker had never been sent off in English football, and although he insisted he did not mean to hurt Gower on Saturday, he confessed to catching the Swansea midfielder.

“Obviously, I didn’t want to do anything bad against the other player,” Torres said.

“I tried to take away my legs, but I arrived late to the ball and I kicked him a little bit.

“It’s a pity and I’m really disappointed for that.”

He added: “It is the first time I have received a red card in the Premier League and I hope it is the last one.

“It was really disappointing, especially because the team had to play with 10 men for a long time.”

While Torres continues to endure a turbulent on-field Chelsea career, he says the same is not the case off it.

Indeed, the Spain star has found a home so near Stamford Bridge that he has begun walking to matches.

“It’s different playing in England, especially at Chelsea,” he added.

“I can do this kind of thing. It’s a pleasure to be working and be respectful for the people.

“I don’t live far from the ground and it is nice to see the atmosphere before the game and all the fans waiting.

“They already know I’m coming but it will probably be more difficult next time!”

He is one of Chelsea’s freshest players after featuring for just 39 minutes in the past week, with others having played while they were down to 10 men against Fulham in the Carling Cup last week and against Swansea.

The Valencia game is arguably the toughest of the Blues’ Group E campaign and Torres said: “They are a great team and we know that they are ready for us. It’s going to be very, very tough.