Sir Alex Ferguson launched a scathing attack on the referee Martin Atkinson, questioning the official’s appointment for this fixture and effectively casting doubt on his integrity, 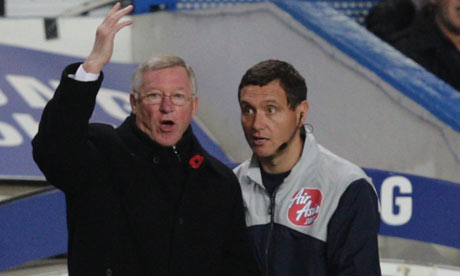 The United manager was left livid after Atkinson failed to dismiss David Luiz for a series of fouls committed by the Brazilian defender, only one of which earned him a booking. The visitors ended up reduced to 10 themselves when Nemanja Vidic was sent off in stoppage time, leaving them without both the Serb and the injured England captain, Rio Ferdinand, for Sunday’s trip to Liverpool.

Ferguson, whose side now sit four points clear of Arsenal having played a game more, had been spared the loss of Wayne Rooney for this fixture despite the striker’s apparent elbow on Wigan’s James McCarthy at the weekend but has now courted potential sanction from the Football Association himself. “You hope you get a really strong referee in games like this,” he said. “It was a major game for both clubs and you want a fair referee, you know … You want a strong referee, anyway, and we didn’t get that.”

Atkinson has officiated 12 games at Stamford Bridge, with Chelsea winning 11, and was in charge of the equivalent fixture last season in which United disputed the award of a free-kick against Darren Fletcher from which John Terry scored the game’s only goal. Asked whether he was surprised that the same referee was appointed for this match, Ferguson said: “Exactly, exactly. I don’t know why he’s got the game. I must say that, when I saw who was refereeing it, I feared the worst.”

Ferguson disputed the award of the 80th-minute penalty as “so soft” but his main complaints centred on David Luiz’s three challenges, the first of which floored Javier Hernández some three minutes after the Chelsea defender had drawn them level. That went unpunished, with the Brazilian then booked for a late tackle on Rooney only for a second brush with the England striker to go ignored.

“It was incredible,” said Ferguson, who will play Wes Brown alongside Smalling at Anfield. “I don’t know how he’s on the pitch. Even before that [first foul on Rooney] he’d done Chicharito [Hernández] off the ball, late. Nothing’s done and the referee’s in front of it. He’s then done Rooney, clear as day, and he’s six yards from him. Doesn’t do anything.

“These decisions change the game, and he’s going to be refereeing every week. I was proud of my players. They’ve endured a lot of decisions against them, they’ve carried themselves through it, done their best, created chances with good football, and didn’t deserve that.”

Asked whether Chelsea, now 12 points adrift of the leaders, had thrust themselves back into the title race, Ferguson added: “If they keep getting decisions like tonight, it could change everything. They got a lot of decisions in a major game and that surprised me. It’s been three years in a row now down here. It’s hard to take.”

Carlo Ancelotti admitted David Luiz “might have been lucky” but was impressed with the centre-half’s performance. This victory ensured the champions leapfrogged Tottenham Hotspur back into fourth place, with Frank Lampard claiming a “signal” had been sent out as to the team’s intent.

Yet, even with their deficit from United cut with a game in hand and a trip to Old Trafford to come, Ancelotti conceded the gap could not be bridged to the top. “It’s too far, too far,” he said. “Also because they’re a very good and strong team, and it’ll be hard for them to lose points in the next few games. I cannot believe we are this far behind, but we have to be honest. United have played with more consistency than us. But this was an important win for our form and confidence.”