Chelsea’s domestic predicament makes a midweek excursion to the Stade Vélodrome feel like an unwanted distraction. Their final Champions League group game is little more than a nuisance of a dead rubber when time would surely be better spent back at Cobham working out how to deal with Tottenham Hotspur on Sunday. Yet, for Didier Drogba, the motivation is clear: this is the homecoming he has craved for six long years. 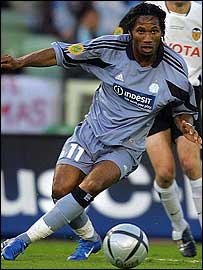 The bond between Drogba and l’Olympique de Marseille is remarkable when one considers that the Ivorian played for the French club for only one season. That campaign, 2003-04, was marked by 19 goals in the league, five in the European Cup and six en route to the Uefa Cup final, and ended with his hero status among the most fervent supporters in French football established. The locals saw him as the natural successor to Rudi Völler, Alen Boksic, even Jean-Pierre Papin, and still thrill at the memory of the rampaging display and the two goals that knocked Sir Bobby Robson’s Newcastle out the Uefa Cup semi-finals.

Although the striker still owns a property on the bay here, this will be his first competitive return since his £24m transfer to José Mourinho’s Chelsea in the summer of 2004. Indeed, he has not trotted out on the turf at the Stade Vélodrome since tearfully taking one final look round the ground after his farewell press conference that summer. “I’ve always been angry with myself for not saying goodbye to those wonderful fans, for not having thanked them one last time,” he said.

Les Phocéens are not always the most accepting of fans, so achieving talismanic status over the course of a 12-month stay was no mean feat. Those on the virages will bellow his name again on Wednesday night. “The feeling between the fans, the city, and me was unbelievable,” said Drogba. “I gave everything and they gave it back to me as well. The atmosphere that night against Newcastle … it was like the Bombonera [Boca Juniors’ ground] . This is a meeting I’ve been waiting for ever since I left Marseille. I’m coming home.”

It might have all been so different. After making waves at unfancied Guingamp, where he first burst in to the public consciousness in a prolific second season, the suitors queued up to lure him away. Lyon was the likelier destination. The president, Jean-Michel Aulas, sent his wife flowers in a bid to turn his head. “After the last game of the season, which we won 4-1 at Gerland [Drogba and Florent Malouda each scored two], the Lyon midfielder Juninho came and spoke to me and said: ‘Come and join us at l’OL. I’ll set up loads of goals for you here,'” said Drogba. “When a player like that speaks, you listen, especially if you’re playing for a small club like Guingamp who’d been in the second division 18 months previously.

“But when Marseille came in for me, I couldn’t turn them down. I remember the first call I took from their manager, Alain Perrin, asking me to join l’OM. He wanted to play me up front with Djibril Cissé, who Marseille were trying to sign from Liverpool at the time. That would have been an amazing partnership. My former agent Pape Diouf [then just installed as Marseille’s general manager] was wary of getting me in because he knew how hard it is to settle at Marseille. I actually had to convince him that I should join.”

There were to be no regrets as Drogba duly ran riot. The 11 goals in European competition, in particular, singled him out for hero-worship status at a club which so longed to return as a powerhouse in elite competition. Valencia would prevail in the Uefa Cup final at Marseille’s expense but, at the close of that debut season, the forward envisaged a title challenge to come. “Then Pape came to visit me in Cameroon, where I was playing a World Cup qualifier, and told me Chelsea had made a massive offer,” he said, the implication being it was too good to turn down. “That knocked the wind out of me. I didn’t want to leave. Full stop. I’d only just signed a one-year extension to my contract, and here was Pape telling me that this was a deal that would set me up for life.

“Chelsea didn’t mean a whole lot to me back then. I’d watched their Champions League semi-final against Monaco that season, and I was on Monaco’s side. I knew Didier Deschamps, Marcel Desailly, Claude Makelele and Gianfranco Zola. They were great footballers, but it wasn’t my team. It wasn’t my l’OM. I just didn’t have any desire to be part of their team. That’s just how I felt.” Drogba went further in his autobiography, admitting he thought it was “a joke” when he heard Chelsea, of all clubs, were his suitors. “Marseille had brought me happiness, excitement, passion,” he wrote. “What could lure me away? I was like a king on his throne, just without the crown.”

It was not until the build-up to his farewell press conference that Drogba truly understood why the club were so willing to allow him to leave, with Marseille salivating over the fee they would receive and wary that a previous reluctance to sell Daniel van Buyten had cost them millions in a potential transfer fee when his form subsequently nose-dived. “[The then club president] Christophe Bouchet told me: ‘A while back, we could have sold Van Buyten for a lot of money but we decided to keep him … But then his form dipped and we ended up losing out on quite a lot of money.’

“When he told me that, their thinking was obvious. Clearly, some people at the club thought my form that season had been some kind of ‘accident’. A one-off. That hurt me. I was really down after that final press conference. I went off into the dressing rooms on my own for the last time and I broke down. I cried and cried. I went out on the pitch for the last time and, again, I was in tears.”

There will no doubt be tears again on Wednesday night as the hero returns. Deschamps, now the French club’s coach, has already said he believes Drogba will end his career back at the Stade Vélodrome. “He really wants that,” said the Frenchman. “The crowd is thankful for what he has done because, even if Didier has been at Chelsea for six years now, he was always honest and always said Marseille was his club at heart.” The visitors must hope being back in familiar surroundings brings the best out of the striker.