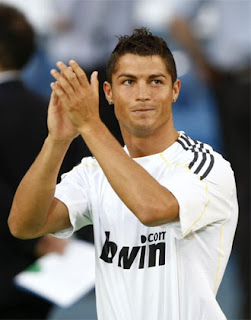 Ronaldo arrived at United as a little-known teenager in 2003 and left as World Player of the Year to join Real Madrid in an £80 million move in July 2009, and Ferguson says the Portuguese star is happy in Madrid.

“It would be very difficult,” Ferguson told reporters.

“He had a great time here but he is at a great club now too.

“I spoke to him after the game [between Real Madrid and Barcelona in the Champions League semi-final first leg last Wednesday].

“He had a great time here, we got six years out of him. We got him as a kid and he went to Madrid a man.

“He is enjoying being there and though he might not have been at his best on Wednesday, he is still a great player.”

Manchester United are widely expected to reach the Champions League final after winning 2-0 in the first leg away at Schalke on Tuesday, and Ferguson says team spirit is key to any side’s success.

“Individuals can make a difference, as Ronaldo did many times for us, but if you look at the work-rate of our team collectively on Tuesday night that is what we try to aim for.

“If we achieve anything it will be the collective that does it.”

United are expected to face either Barcelona or Real Madrid in the Champions League final though Ferguson refused to get involved in any arguments about the events of the first leg between the two Spanish giants.

“This is not the time to discuss it because there is so much in the post-match analysis, with the recriminations on both sides.

“We should let the dust settle and concentrate on reaching the final.

“The only thing I would say is that there could have been only one hour’s play because the game stopped so much.

“You want to go to a game and see an hour and a half.”