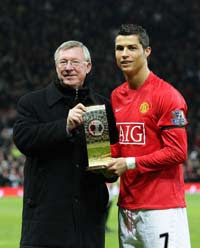 praise on former manager Sir Alex Ferguson, branding the Manchester United legend as the best coach in the world.

Ferguson ignited Ronaldo’s career, providing a platform for his talents when taking him to England from Sporting Lisbon in 2003, and the Portuguese international collected three Premier League titles as well as a Champions League winner’s medal during his six-year stint at Old Trafford.

In an interview with publication Metro, CR7 was appreciative of the Scot’s role in developing him as a player, and when quizzed over a comparison between Ferguson and his current coach, Jose Mourinho, he remarked: “In some ways, they are alike – they both have plenty of experience and have won all there is to win in football.

“The only difference that comes to my mind is that one is older than the other. I loved working with Sir Alex. We got on really well and today he is my friend. From where I am concerned, Sir Alex Ferguson is the best coach in the world.”

Ronaldo also discussed the criticism he received in respect of his slow start to the new season with los Blancos, where he struggled to find the net in his first four matches, before the goals began to flow.

He continued: “My task has not changed. I work, I stay calm, and I let things come to me. It is true that I had to wait some matches to score goals, but from that moment everything has changed. This is proof that football is unpredictable. That is the situation I am experiencing now and I am happy for it. I hope it will continue like this.”

Furthermore, he discussed in greater depth the impact of Mourinho, and also of new team-mates Sami Khedira and Mesut Oezil, adding: “There is more discipline. Mourinho has adjusted the way that we play. He is a fantastic coach, and the titles he has won prove his value.

“[Oezil and Khedira] are both excellent players. They continue to surprise me, like they did at the World Cup. I love playing with them.”

Finally, on who he believes will win the Ballon d’Or title, he concluded: “That it a hard question. We will see what FIFA decides this year.”